This series is dedicated to Cody, Brett, Manuel, Trey, Kaitlyn, Leone and all of the children who read our website; this section tells about our visit to the Koorana Crocodile Farm and Restaurant. What did we eat there after our tour? Croc, of course! 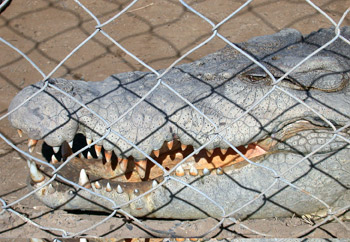 We set out from the Keppel Bay Marina on a Sunday excursion to the near-by Crocodile Farm. Our guide works on the farm, which has over 4000 crocodiles. It is the first private croc farm in Queensland, established in 1981. The farm sells croc skin for purses and boots and shoes and croc meat for food. They also breed crocs, send crocs to zoos, and keep dangerous crocs taken from rivers.

First, our guide showed us a croc nest on a river bank, filled with eggs buried in the mound of dirt and sticks. Female crocs can lay 50 eggs in one hour! They remain near their nest to defend it during the incubation period, which can take 75-100 days. When walking along a river bank here, you do not want to get in between a female’s nest and the river! She could chase you up a tree!

A baby crocodile (hatchling) has a special ‘egg tooth’ on the tip of his snout that can slice through the egg membrane and break through the outer shell. When they are hatched, crocodiles already have little teeth. They can feed on insects and small shrimp immediately. 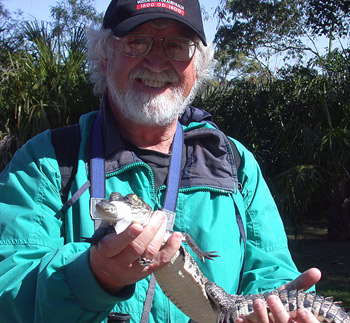 Our guide showed us how strong a croc’s jaws are—look at this first photo: his teeth are not candy corns even though they look like them. The jaws are only strong one way: to clamp down on prey; they are strong enough to break a human in two. But the other way, the jaws are very weak; it would be difficult for an adult croc to open his jaw if it were closed with duct tape. Our guide showed us how you can tie a baby croc’s mouth shut with string and he cannot open it. See Gunter with the baby croc.

If you do get attacked by a big croc, just shove your arm down its throat, he told us; the croc has a flap way back in its throat that has to stay closed in order for it to swallow. 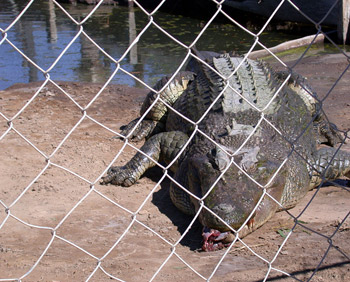 We met Wally, a croc weighing 250 Kg. Back in 1991, he terrorized a women’s rowing team practicing in the Fitzroy River in the town of Rockhampton near here. The town asked the farm to come and get him. He was named after a rugby player, because he was caught on the eve of a State of Origin rugby match.

Next was Rocky, a good crocodile, once kept as a pet on Thursday Island, now a mascot for the town of Rockhampton. The farm hires him out for festivals and such. Look at him smile after being fed raw chicken. 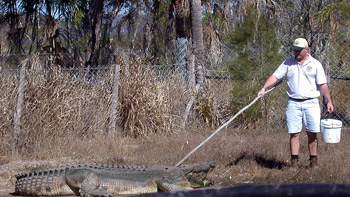 Then there’s Shaw, who drowned his keeper at the St. John’s zoo. He is now 83 years old. The University of Sydney used him for aging experiments (biotelemetry trials). He didn’t graduate! See the ridges on his nose. The bigger and older the croc, the bigger these ridges are. The largest male saltwater crocs can reach 21 feet and weigh over a ton. That is 10,000 times what they weigh when they are hatched! Males grow faster and bigger. On a farm, because there is enough food for them to eat, they can grow twice as fast. 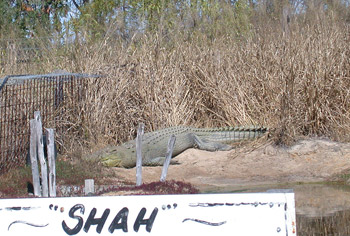 Buka is another good old croc. The sign on his pen says that he was caught in a pond near a sugar mill where workers went swimming every day and he never hurt a soul.

After the tour, we had lunch. Look at the menu. What would you order? OPA had croc soup. I had croc steak. Both were very good. 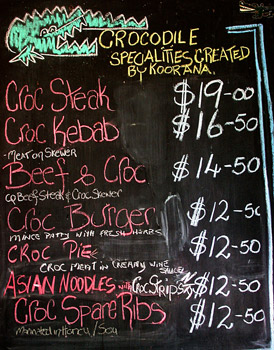 After lunch, we were free to walk around on our own. We saw this croc sunning on the river bank. See how he blends in with his surroundings. When the temperature is colder in the wintertime, as it is now, crocs can barely move; they need to warm up in the sun to get energy. That’s why they lay in the muddy banks of the rivers. They do not have a good temperature regulator, so they cannot maintain a constant body temperature. So, if you want to wrestle a croc, cool him down first! That’s probably what Crocodile Dundee and Steve Irwin do.
Go to Crocs and Critters, Part III 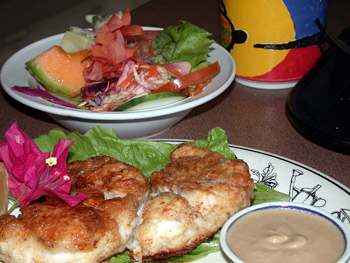 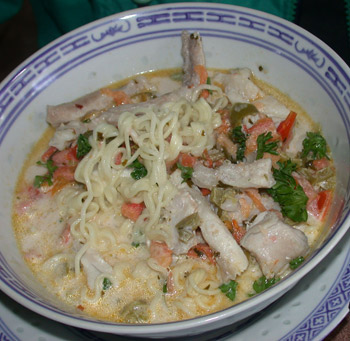