Navigating the Narrows
By Lois Joy

“How do you feel about going through the Narrows tomorrow?” I looked up from preparing the potato salad to see the video camera in my face.

“Exhilarated, yet apprehensive,” I answered, trying out my ‘stage voice.’ (This was the first time Gunter had used our new video camera on a voyage.) “I’m remembering the advice that old salt Bruce gave me before he helped us cast off at Gladstone: ‘Once you get to the Narrows, an hour or so before high tide, the receding tide and the incoming tide from two merging river systems will suck you in and spit you out. No worries.’” 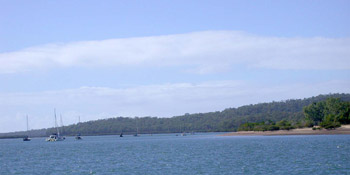 “Sounds like putting Pacific Bliss through a vacuum cleaner,” I mumbled to myself after he had turned off the video. Another day, another adventure. Was I ready for this?

“How do you feel?” I turned toward him.

“With the electric chart that we now know is very accurate here, with the Curtis Guidebook in your capable hands, with all the advice we’ve been given…” he paused for impact, “I feel very secure, with belts and suspenders.”

“Brazen corporate talk,” I thought to myself. I wasn’t going to get an emotional answer out of the Captain tonight! He obviously needed his courage.

We are anchored here a little ways back from the mouth of Graham Creek. It’s really a river; names here underestimate the vastness of this Land Down Under. We have about five miles to go from the mouth to Black Swan Island, the beginning of the real narrow part of The Narrows, the name given to the entire 27-mile mangrove-lined waterway that winds through the mainland and Curtis Island. It’s a shortcut that avoids having to re-enter the long shipping channel approaching Gladstone, the one that I had dubbed the ‘Teal Highway.’

I perused my notes from John: “Be at Black Swan 15 minutes before high tide at Gladstone. It’s about one mile away from where you’ll be anchoring at Graham Creek.”
The notes seemed to disagree with my conversation with Bruce: “Leave Graham Creek one hour before high tide.”

I wondered what Stu Buchanan had to say about this in his book about the Queensland Coast, called The View from Pluto:
“So far, we had successfully followed the numerous beacons, even though at times the depth sounder had shown less than half a metre beneath the keel. The chart showed we were now approaching the shallowest section of The Narrows, parts of which dry out at low tide to depths of 1.8 metres. Opposite Monte Christo Creek, the reading on the depth sounder dropped to 0.5 metre…0.4…0.3…then a worrying 0.2.
“It’s not looking good, Stu,” Shirley said, bracing herself for a grounding.
“It seems to have steadied,” I replied. “Anyhow, it’s well over an hour before high tide. If we do hit bottom, we’ll get off pretty quickly.”

They managed to get through, despite going through before high tide.

I looked up our electronic chart: SeaMap, which we operate using MaxSea. The distance to Black Swan is five miles, not one. Now it all was beginning to make sense. And Black Swan high tide would be later than Gladstone’s—which according to the tide table—would be at 6:50AM. Our world clock showed sunrise at 6:30. We would set the alarm for 5:30 AM and haul anchor at dawn’s first light. And with her two engines tuned up and a spanking clean bottom, Pacific Bliss would go fast. No worries!

By the time the sun set in the creek, a total of ten boats were anchored here. As we enjoyed our sundowner, our chores done, I laughed, “Perhaps tomorrow will be like the ‘Teal Highway’—only it will be the ‘Narrows Highway.’”

“It’s so narrow you can touch the mangroves as you go through,” one ‘boatie’ had cautioned. I didn’t want to come upon a group of grounded monohulls. I planned to take off early so that we could beat them to the pass. 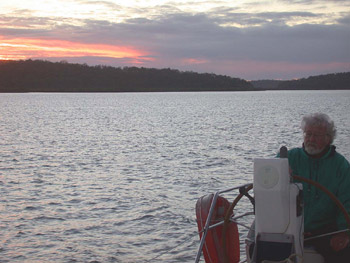 The rolling of the incoming tide at Graham Creek had us sleeping like babies. We were awakened by the jangling of the alarm, alerting us that today was the day. I quickly dressed and pulled on my fleece. The cradle moon still hung over the shoreline, but the stars had already disappeared. We sipped our coffee and splurged on energy to make toast with peanut butter. None of that vile vegemite for usYanks!

We hauled anchor at 0620, in the light of the pre-dawn. By the time the sun had peeped over the riverbanks at 0645, we were well on our way, motoring to Black Swan at eight knots. None of the monohulls followed. By 0705, we had reached the first red marker. I sat at the port helm while Gunter steered from the starboard, the Curtis Coast Guide firmly in hand, faithfully checking off the buoys as we passed: red at our port, green at our starboard, then four more reds in a row and another green before reaching Boat Creek. Black-and-white cormorans greeted us, already perched on the buoys. The early morning light shining through the mangroves was spectacular. It would be a glorious, sunny day!

So far, so good. We were ready to turn the page to “Crossing D4.” 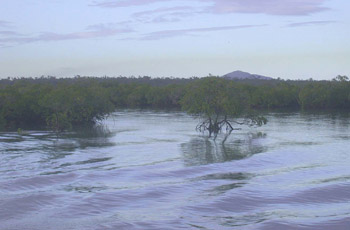 “If sufficient depth of tide enables vessel to pass the shallows, there are few dangers to worry the navigator elsewhere,” it read. Below the directions, the Guide showed an aerial photo of The Crossing when the tide was so low that cattle could cross. After giving the instructions for passing six beacons, the Guide went on: “Follow leads into small bay but turn out smartly to clear the mangrove shore, opposite front lead beacon, at least 20 metres, as rows of rock extends from Curtis shore. Leave the green beacon (No 11) 10 metres to starboard. (Rails of fencing extends one panel outside of this beacon). Keep northern set of leads boldly open to the south until last close shoreline is past when lit leads should be in line astern. As last green beacon (No 13) is approached, open leads again to south following port hand shore into deeper water.” Not exactly a confidence builder.

“Towards the red as soon as you edge past that green!” I answered.

“Its OK now,” he replied. I breathed a sigh of relief. We wound around beacons until we reached the green one in front of the cattle crossing. Two lines of fencing ran parallel— right into the water, as the outgoing tide sucked us past. The depth meter report 8 feet. 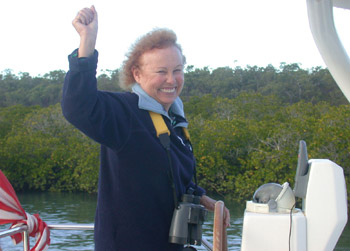 By 0830, we were motoring along at 7 knots, Mosquito Creek to our starboard. We had just passed our last hurdle, a sandbar that protrudes out into channel. We couldn’t even see it, but the chart showed it was there, and Bruce had warned me to give it wide berth. We passed SwagMan there, another Cat with only one outboard for power, and the only yacht we saw on our voyage through The Narrows. Soon after, we had passed the area where Deception Creek feeds into the Narrows at Division Point. The blue waters of the Pacific lie ahead with the purple bluffs of the Northern Shoreline beckoning beyond. We were home free!

By 0920, we were securely anchored a little north of Pacific Creek off the sandy banks of Sea Hill, its lighthouse clearly in view. We had the rest of the day to read, to write, and to navigate our 26-mile sail through Keppel Bay the following day. We would proceed to Rosslyn Bay, berth at Keppel Bay Marina, and tour the Rockhampton area of the Queensland Coast. The sunset at Sea Hill was spectacular, a perfect ending to another adventure-filled day. 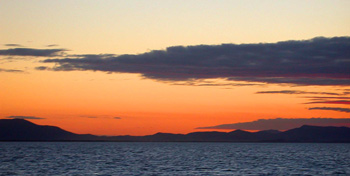 Stories in this Section