Stories in this section... Australia Voyage 4
Back to Bundy and Bliss
Barnacle Bliss
The Town that Wasn't
Messing with Boats, Part V

We rejoined Pacific Bliss the last week of April with a long list of overdue repairs and maintenance. Though one can find sometimes knowledgeable tradesmen in the islands of the Cook, Tonga, Fiji and Vanuatu, the real return to civilization and expertise is in Australia, where services as good as in the States are available. We planned to use Aussie services to bring Pacific Bliss up to near perfect standards again.

Antifouling
The most important task was the hauling out of the boat to give it a new antifouling paint job. The last time this was done was in San Diego in 2001. It became more and more difficult to keep the bottom clean of barnacles and other growth as we went along. When we came back to Bundy this year, indeed the hull was covered with a thick skirt of growth and the propellers as well, to such a degree that we could only make 3 knots at full power going up the river to the Midtown Marina. (See related story Barnacle Bliss.) This marina has a slipway which allows large cats to be hauled out on a railway that submerges into the river.

Very quickly, all the growth was removed with a 3000 psi high pressure water hose by Glenn, the son of the marina owner. A day later, two layers of antifouling paint—one black and one blue—were applied. Any damage to the gel coat was repaired. As the next step, the hull and the deck were washed with cleaners and a fresh coat of wax was applied.

Engine maintenance and repairs
I ordered a thorough overhaul of the two diesel engines, which had about 1400 hours of use and were last completely checked and maintained about 700 hours ago.
Specific tasks: 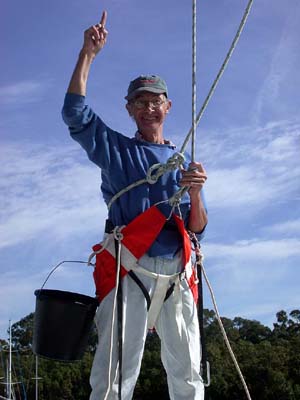 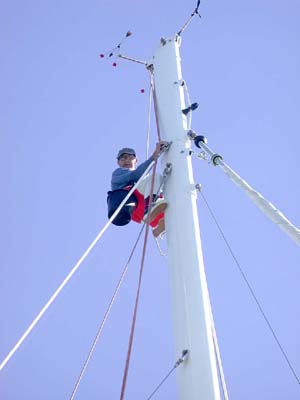 Charging system
On the SB, I have two 50 A alternators in parallel for a 100 A total output. The original alternator was faulty because of some saltwater intrusion. This was caused by a leaking end cap on the engine heat exchanger. So a new alternator was installed. All OK now.
The port alternator was charging but the charging current was not reading correctly on the instrument monitoring panel. Mark, a smart Aussie electrician, found that the grounding was wrongly done from the factory: The ground was supposed to be floating connected to the regulator; the factory had the ground connected to the battery ground. OK, now that sided worked. I should also mention that I need a new “Consumation Services” switch on the instrument panel, which was intermittent since 3 years. I finally got a new one from Tanguy, formerly with Catana, who had formed his own company to provide cruisers with parts.

Since the launching of Pacific Bliss (Hull # 22) in Oct.2000, the 200-liter fridge had never worked properly. The compressor got very hot, the line to the fridge got hot, and it was difficult to get below 15 degrees centigrade. Service calls in Fiji did not change anything besides topping off the gas. Finally, in Bundaberg in OZ, David, a smart bloke, figured out that the fridge was connected the wrong way. 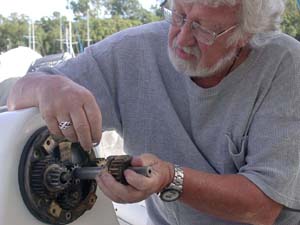 The following sequence is correct: the output (high pressure hot gas) of the compressor goes to the keel cooler (Condenser) and then the cooling box (evaporator) and back to the compressor. It took only 10 minutes to change the plumbing around with amazing results: The compressor runs cool, does not cut out, and the line to the fridge is cool too. The temperature drop in the fridge is rapid now. It was almost obvious, because the two lines which were supposed to be connected together were both marked with a yellow band. 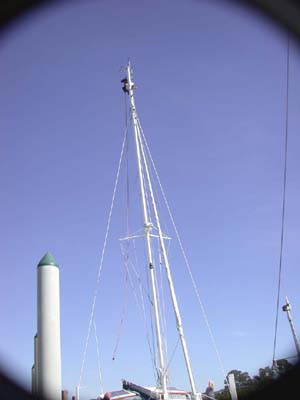 Dinghy
On arrival in OZ we found a sick dinghy: completely deflated. Pumping it up and brushing with soap we found a hole in the bottom and glued a patch over it. With the boat later out of the water, we thoroughly cleaned the dinghy, applied a coat of fiberglass to the hard bottom and had the engine lubricated. New hoisting U-bolt hardware was installed as the old one was partially broken.

Sheaves replacement
Seven lines from the mast (halyard and reefing lines) go through aluminum rollers at the mast foot and, again, through rollers in the cockpit. These rollers were corroded badly. Though I had the cockpit rollers freed in Vanuatu, I decided to replace all of the aluminum rollers with plastic rollers, which I had ordered from France. This required emptying all the anchor lockers and—with acrobatic skill—disassembling the rollers, and replacing them with plastic. This was done expediently by Mick who used all his skills to get the fully corroded rollers out of the assembly.

Windlass
The windlasses needed a replacement of the plate on which the chain stripper is mounted. The chain stripper broke loose twice. Without it, the hauling up of the anchor is tedious because somebody needs to stand by the windlass and pull the anchor chain away from the gypsy. Again, Mick did a great job in getting this done.

Woodwork
All the teak was oiled and other wood was painted with several layers of protective paint.

SS fittings
All deck SS fittings were cleaned. Lois directed the cleaning of all SS on the inside as well.

Rigging
The standing rigging was checked. The VHF antenna on top of the mast was horizontal, probably from a heavy bird sitting on it. Our friend Alain from S/V Jasemani de Montreal volunteered to climb the mast, check the rigging and everything, and attach the lazy jacks, which I had to repair earlier. After installing the sail bag and both head and mainsail, Pacific Bliss looks like a sailboat again. (See photos.)

Water maker
The Spectra water maker developed a leak at the high pressure inlet to the membrane housing, requiring a new end cap. Fortunately, there is a dealer in Brisbane who could supply the necessary part.

Plumbing system
The Y- valve from the head to the outlet to the ocean and the holding tank is a weak part in the plumbing system. After one season, the valve corroded and was full of deposit. An attempt to move the valve results in breaking of the valve stem. The SB valve was replaced and the port valve was cleaned in hydrochloric acid by a radiator shop.

Winches
All six winches were disassembled, cleaned in Kerosene and, after oiling and greasing, were assembled again (see photos).

Surveyor
Per request from my insurance broker, I had a survey done when the boat was out of the water. The report came out very well and the surveyor stated the boat is practically like new. He also said that Bundaberg had not seen a catamaran of this quality in the Marina, which was music to my ears.

All this effort has taken about four weeks, making progress every day but Sundays. Pacific Bliss is now ready for Voyage Four—the Great Barrier Reef.

Thanks to Workers and Friends 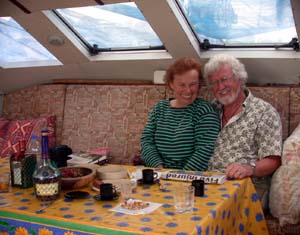 I’ve grown to love the Aussie marine community here. The tradesmen are first-rate, and kind and friendly to boot. And the wonderful thing about the cruising community is that yachties are always ready to lend a hand, no questions asked. We’ve made new friends in Alain and Jeannette, on board another catamaran moored here, Jasemani, also built for them in France. We share many common experiences: they have sailed here from France, into the 12th year of their circumnavigation. After the rigging, we had a delightful “Thank You” dinner at the Thai Tulips in Bundaberg and then partied some more on board Pacific Bliss. Yesterday, we were invited on board Jasemani for a “Koffe Klatch,” French-style, complete with choice of liquors. 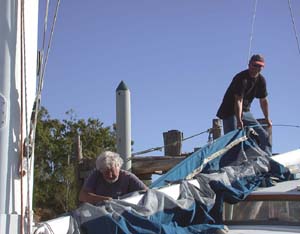