Memories of Burma/Myanmar
By Lois Joy

December 28, 0830: The Country Tour. My guide, Stevin, has arranged for an English-speaking driver for me. He picks me up at my hotel at 0830. I have asked to be taken on a countryside tour that is not too far, because I also want to see some more sights around Yangon today. As we leave the city, my driver points out a typical Burmese bus. They are invariably full to the brim, and usually a group of young men are holding onto the back as it bumps along. The day’s record was about 8, but I failed to get a photo of that one! 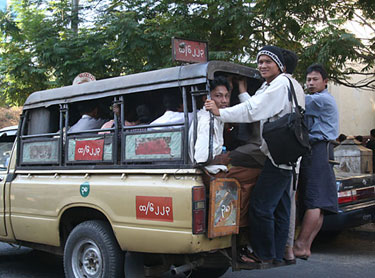 We cross the bridge alongside bicycles loaded with food, supplies, and even building materials. Underneath, a multitude of ferry boats ply the river. Once across, the scene changes rapidly. Any relative cosmopolitanism and urbanity—such as it is in Yangon—ends abruptly. The car bumps over and around potholes so much that there is no way that I can even take notes. We pass tri-shaws and horse-driven carriages. On our way to Thanlyin, we pay 50 kyat to cross a bridge. Four young men in khaki uniforms take the toll. They are laughing and joking and pointing at the “blonde foreigner” in the back seat. One is pushing his friend toward me. I smile and say “mingalaba,” the Burmese hello, literally, “it’s a blessing.” Then they ease off and smile back. We pass a fuel depot, with a huge mountain of rusty oil drums. By the marshy river’s edge, fisherman paddle canoes. The next “toll station” on the two-laned black-top road is a charge of 100 kyat, the entrance fee for the township. There is a toll for every town, I discover. It is only 0920, and already I am in a very different world. We pass through numerous small villages; shops and homes along red-and-white brick curbs, with no sidewalks, dirt yards, corrugated roofs, and peeling painted fences. Beyond the villages, some of the roofs are thatched. Water buffalo are driven by farmers along the side streets of dirt. Here, most of the English signage I saw in Yangon ends, except for old Camel and Toyota billboards posted into the roadside ditches filled with trash. “There is no government garbage service in all of Burma,” my driver says. “In the city, businesses pay privately to have their trash hauled to a city dump. Here in the country, it is just thrown out.” Even along these remote country roads, I see groups of maroon-clad monks walking single file, with their umbrellas and alms bowls.

The fields end and the population density increases as we drive through Thanylin on our way twelve km southeast to Kyauktan, and the Kyaik Hmaw Win Ye Lai Pagoda, quite a mouthful! The road terminates at a wide river with a paya (shrine) perched on a tiny island in the middle of a fast moving river. My driver parks and says that he will come with me on the ferry to the shrine, and wait for me there. As I wait by the shrine, little children stare at me openly with their big black eyes, while the parents try to hold them back. One brave girl befriends me and shows me how to go down the steps to the ferries. My driver comes and tells her, “We will take a different ferry.” She disappears reluctantly. Everyone is helpful and polite, and makes a special point to see that I enter and leave the ferry safely. Little do they know that I live on a boat! 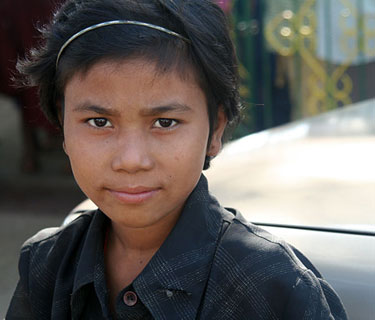 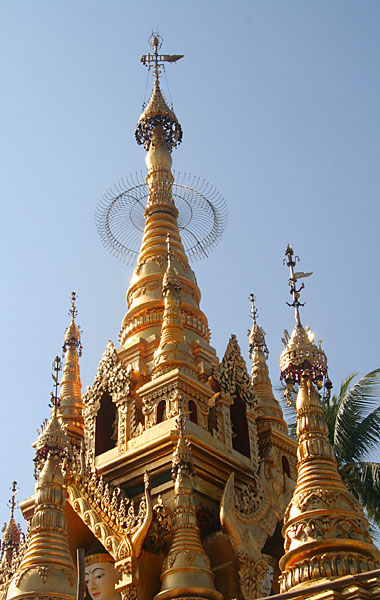 I walk around the shrine, looking at the murals of other paya, even some in other countries, and watching the pilgrims feed the weird fish splashing about the temple complex. Then as a sit down in front of a Buddha, two twenty-something Thai ladies approach me. One has a recorder and microphone and wants to interview me for a survey of tourism in Myanmar. Pim and Kathy have interviewed six “tourist subjects” and have four to go. Chatting after the survey, I find out that Pim went to University of Wisconsin in Menomonie. “I was born in Wisconsin,” I tell her, “and went to University of Wisconsin, Eau Claire.” Another coincidence: we are staying at the same hotel. “Do you want to have dinner there tonight?” I ask.

“No, we are going to the Karaweik for the buffet and cultural show. Do you want to come with us?” Pim asks her guide to book another place, and I hurriedly make plans to meet them there as my driver patiently waits.
We take the ferry back across the river to Kyauktan, the small town along the river banks. Across from the landing, a souvenir stall has been set up. It is the first one I’ve seen during my countryside tour. The white T-shirts, the only ones that picture the Paya, are dirty along the folds. Evidently, they have been there for quite some time. The vendor and my driver carefully search her entire stock piled on the concrete behind the stall. “This one is clean,” my driver says. It is a Medium, usually my size, but here in SE Asia, I know that it will be too small. I buy it anyway, not wanting to disappoint the vendor after all this time.

On the way back through Thanylin, we stop at the huge, golden Kyaik-khauk Paya, rising from a hill on the north of the road. It is said to contain two Buddha hairs delivered to the site by the great sage himself. The first stupa on the site was most likely erected by the Mon 600-800 years ago. There is a welcome elevator to the top for all of 5 kyats, less than a penny. As I walk around yet another Buddhist temple, I marvel at all the design and effort put into these holy sites. 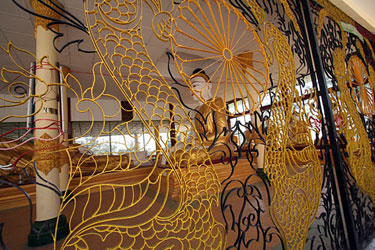 Our next stop is the local Thanylin market. My driver stays in the car and I walk through the stalls. In this market I am the oddity, the only white person there. I smile and occasionally ask to take photographs. Even though they do not understand me, they smile their acquiescence. I purchase a bouquet of yellow marigolds so that they can see I am buying something.

I walk by a senior citizen who has the lines of time written on her face, and I wonder what all she has experienced here. I turn back, intrigued. She seems OK with my camera; she is clearly evaluating me as well. I am using a telephoto so I am not “in her face.”
After one walk through the small market, I have reached the back where the locals are walking to their home amidst piles of plastic bags and trash. How sad. All of Southeast Asia, it seems, is becoming buried in plastic—even in so-called “under-developed” countries.

We head back past the toll booths for each town and pay again. Then we cross the bridge. Our next stop: the Pier. We pass a fairly upscale area with a bar and restaurant overlooking the Yangon River. “That is very expensive,” says my driver. I want to show you the pier, I park there, you walk.”
“O.K.” Not knowing the area, I am amenable to anything. He parks and I walk the pier from one end, harboring a lone large ship, to the other, winding my way back through throngs of dockworkers. Along the walkway from the ferries to the quay, a string of men, one after the other, single file, carry bags of rice on their backs. They deposit their load into waiting trucks, parked back-to-the-quay. There are no modern shipping containers here, no rails, no electrical or mechanical conveyances of any kind. I am thrown back to my youth, reading Rudyard Kipling and George Orwell. I never imagined that this scene still existed anyplace else in the world. I am mesmerized and keep on strolling along the quay, almost slipping on blocks of ice being unloaded by trucks and onto the ferries. At one truck, as I photograph bags of fertilizer being unloaded and carried, two bags apiece, on the bowed necks and backs of the workers, a man notices me, and engages in conversation. “This,” he proudly points to a cloth bag printed PHOSPHATE, “this fertilizer going to my farms on the delta.” 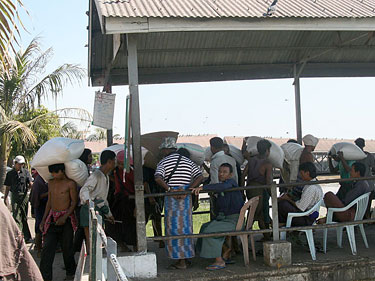 Ah, the delta. I’ve had a glimpse of it, traveling over bridges to Thanylin and Kyauktan. From my pre-travel reading, I know that the area is criss-crossed by tributaries and canals and mostly flat terrain, driving home the region’s vulnerability and dependence on water. One of the most fertile regions of the country, the vast basin stretching from the Bay of Bengal on the coast to the Bago range, receives the nutrients deposited by the Irrawaddy, Bago, Yangon, and Pathein rivers. This river network irrigates million of acres of farmland, making the delta one of the “rice bowls” of Myanmar. In addition, the water inlets along the coast provide much of the country’s freshwater and saltwater fish harvest. During the December 2004 tsunami, the majority of the deaths occurred in the delta area. 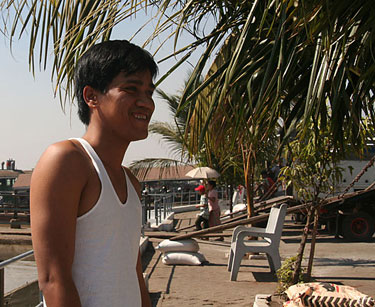 A pre-school boy and his toddler brother watch me walking along the quay. The little one breaks out crying and the bigger one tries to console him. I offer them some treats; the little one quits crying but is still afraid of me. Families of the drivers eat their lunches along the quay. It is a bustling, evolving scene. I can’t get enough of it; I could watch for hours. 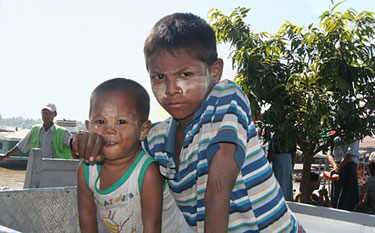 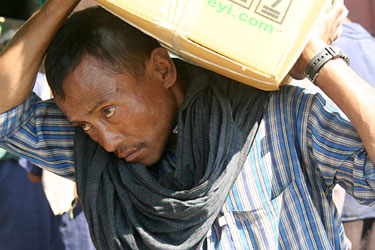 More Photos of the Pier

Articles on Current Sanctions
THE EU AND BURMA: THE CASE FOR TARGETED SANCTIONS
Burma sanctions: The case against
Sanctions Have Gotten a Bum Rap
SPEAKING FREELY, The case for sanctions on Myanmar