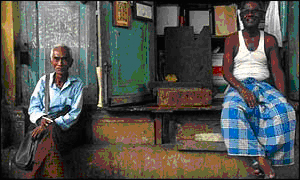 By Ma Thanegi
Rangoon-based journalist
The ideas behind the use of sanctions in their simplest perspectives are:
• The government concerned has been bad; therefore it must be punished.
• The government concerned has been bad; therefore pressure must be put on it so that it will do what it should do, or stop doing what it should not be doing.
The usual argument for sanctions is that they only hurt the government concerned and that it is their fault in the first place for being "bad" so that sanctions inevitably had to be imposed.
My argument against sanctions is that they hurt the people more than the government, and that there are other ways to bring about change other than the idealistic and futile strategies of sanctions, boycotts and isolation.
Where is the 'justice'
Undeniably there are grounds for frustration and bitterness but what is more important: to bring about good changes for the sake of the people or to satisfy emotions?

Myanmar is fertile and rich in natural resources
The indignation concerning "justice" and "fairness" is surely noble, but when the results of it hurt the people, where is the justice?
Is it fair that people are made whipping boys?
After long years of futility, is there still no other alternative than to once again, for the nth time, rage against the government?
Ineffective
Myanmar for 30 years was in self-imposed isolation. Isolation now from one half of the world is not going to have much of an impact.
Myanmar is fertile, it has rich natural resources. Sanctions from one half of the world are not going to starve the country.

Click here to read policy advisor Zaw Oo's alternative view The low-income unskilled people - most of whom do need jobs to feed their families on a daily basis and keep a roof over their heads - will be the ones most hard hit without employment opportunities.
They are the ones without savings or the skills needed for high salaries.
Worse, when boycotts take place, these labourers face the danger of losing the jobs they already have.
The wealthy owners of these factories may lose money through boycotts but is this fair exchange, that tens of thousands of people - especially young girls - face the dangers of poverty in order that a handful of entrepreneurs may lose some money?
Slave labour lies
To accuse (such as in the S.926 Bill introduced to the 107th US Senate in 2001) that all products from Myanmar are made with unpaid slave labour is a ludicrous lie, which can be easily checked out by anyone waiting outside the factory gates to ask the workers themselves.
Such lies, however, are necessary to pretend that this pressure will not hurt the people.
The pretence is the main thing; truth is not important here.
Sadly, what seem to be of even less importance is that the people may lose their livelihoods.
Another excuse about sanctions is that the economic management is in a mess so sanctions make no difference anyway.
A few stable and sound investors can help put in place a smooth running economy. They can have the financial clout needed to urge good changes.
A hundred small companies scurrying around to make money would hardly care about long-term changes nor would they have the financial power to change anything.
Alternative strategies
To go back to the two basic concepts of sanctions, why do they exist at all when we see the punishment hurts the people most, and the pressure falls only on their backs?
Imposing sanctions, especially on a country without a lucrative market, oil reserves or nuclear weapons is an easy step to take, no matter that history has shown that it does not work.
Alternative strategies may not be politically correct nor popular media-wise, but what is more important, realistic changes for the sake of the people, or a popular image of being correct? How long must the people be held economic hostage?
If there is a sincere will to bring about good and realistic changes, then emotions or self-glorification should be set aside, however unfair it may seem.
Strategies that do not work and at the same time hurt the people should be reconsidered in the name of "fairness", which, after all, is the battle cry of democracy.