Links:
Up the Creek    Down the Creek    Letter from Gove    Mackay's Boatyard     The Night of the Cane Toad Queen   Why Gamble on Cane Toads?

Down the Creek
By Lois Joy

We arrived by plane in Mackay on a Friday afternoon, April 22nd, and only then realized that with the loss of a day due to crossing the international date line, the following Monday being a holiday (ANZAC Day), and the next Monday also being a holiday (May Day) we might be in a heap of trouble making the deadline for getting Pacific Bliss launched into Vine Creek when high tide occurs during the daytime—and we did not want to go back down the creek and into the marina at night! (See Up the Creek for last year’s story about putting PB “on the hard” at midnight).

So the date was set for today (Mothers’ Day here) to have John Bates, owner of Mackay’s Boatyard, take PB down the creek. This was the last day in May that a sufficiently high tide would occur during the daylight. We had to make it!

To launch Pacific Bliss on time, we had to use all our old management skills: compile TO DO lists, find out who in Mackay could do what, (and who would work week-ends and holidays) get the tradesmen scheduled, all on a “triage” basis, deciding which tasks absolutely had to be done in order to launch on time. The rudders wouldn’t budge, so Gunter had to arrange for a backhoe operator to make a casket-sized hole under each one so they could be dropped, and the bearings worked or replaced by an expert. (Keep in mind, at this point, the yacht is resting in the yard on piles of tractor tires—see photos in UP THE CREEK story). Gunter quickly tested the engines without water—they started. The Australian sun had done its damage to the trampoline and we decided to replace it. That began a frantic dealer-and-internet search for suitable material that was already in OZ, then talking the very-busy-and-solo sailmaker in Mackay into make us a new net in less than three weeks. But we found that CASH (not credit cards) talks here. Thank God for ATMs! One of the house bank batteries was so hot that it was almost ready to explode; that entailed replacing the entire set; we replaced the two engine starter batteries while we were at it. There were only four of the German Sonnenschein batteries in OZ, so we had to purchase a new unproven Chinese brand, called AGM. Each time the battery men came, we had to take off all the salon cushions, since the batteries are located underneath the seats. The slight difference in size required revamping the under-the-seat storage area to fit. The final part of the triage was that the life raft was due for recertification (a must for participation in the Darwin-to-Indonesia Rally). We hired Chris, an expert from Slade Point. Seeing our eight-person raft inflated for the first time, sitting inside it on the cement floor of the shop, and obtaining training on all the survival gear was awesome! Chris reported that our raft set-up is top-of-the-line, the best he’s seen in a non-commercial yacht. He replaced all of the expired provisions and flares. Then he arrived to hoist the heavy box back into the compartment on the stern of Pacific Bliss just one hour before the crane arrived to hoist PB onto the trailer. 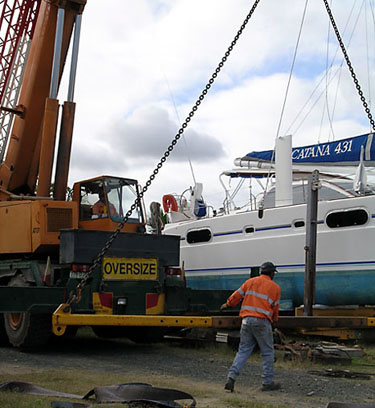 We had to schedule a new crane and operator lift her up from the tires and back on the trailer (last year’s crane had a bearing go out)—this occurred Friday, two days before we were scheduled to go Down the Creek. There is nothing so downright scary as seeing one’s home for the next seven months merrily swinging in the breeze, hung by a sling! I could barely breathe. I snapped photos and video just to keep myself occupied. Actually, my photos taken of the reverse operation (putting her on the hard) came in handy; the new operator used them to ascertain where the sling had been placed last year. Then a stroke of good luck: last year’s operator came on the scene, sans crane, just to advise. How competent and caring these Aussies are! We love them.

We spent Saturday worrying and climbing up and down the swim ladder to piles of boards placed on the ground. A restless Saturday evening included many evening trips climbing down, then walking some distance to the facilities, since we cannot flush “on the hard.”

After a restless night, Sunday—the day of reckoning—finally arrived. The plan was to back Pacific Bliss into the water at the moment the tide changes (and the water is still), about 0730, and then wait for the high tide four hours later to float her off the trailer. She would be backed down the gravel ramp and into the creek. Ideally, the wind would not be blowing so that as the CAT was floated off Gunter could quickly turn her around using both engines, (Our CAT has a lot of windage). No such luck.

Our day started at 0630, overcast with a light rain. “At least it’s not windy,” I observed. John came with his tractor, hooked up the trailer, and by 0730 was ready to pull her to the ramp and into the creek at low tide. Then came a loud POP. The hydraulic hose had broken. Gunter, his face drawn, was imagining the worst. 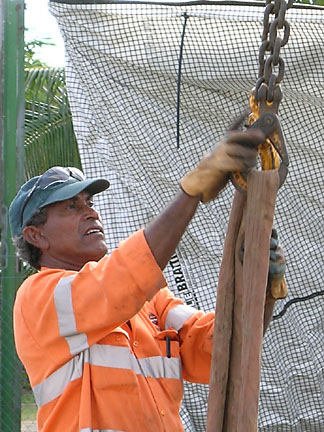 But within 15 minutes, John had a new hose installed and he was trying to make a tight turn in the shipyard, jockeying Pacific Bliss, on the huge trailer, backward and then forward again. My stomach was in my mouth, all acid. But slowly and surely, John edged the rig to the center of the shipyard, turned it, and backed it into the water. But WAIT. (Somewhere in that process, John was also imagining the worst, he told me later.) One tire looked as if it was flattening far too much with all the weight. (They claim she weighs 15 ½ tons now—must be all those books!—she’s not even filled with water and fuel). John was thinking, “One…two…what else can go wrong?” And Gunter had already figured out the worst case, as usual. He was thinking…what if the axle breaks right on that steep ramp, and even if the crane comes to lift up Pacific Bliss, no crane could fit sideways in that narrow ramp with the high banks. It would be a situation with NO WAY OUT. The stuff of nightmares.

Despite all the negative thinking, the process of backing into the water went just fine. And there Pacific Bliss sat patiently, back in her element, waiting for the high tide.

Gunter and I drove our rental car to the marina, and then another cruiser, Peter—who has been a great help to us—picked us up to go back. When we returned, the tide had come up the creek so fast that we had to wade out to the ladder (see photo) that John had propped up against the side of Pacific Bliss—in that croc-infested creek! But I did notice that Rusty, John’s favorite dog, was still alive and swimming in that creek yet again, just like last year. “No worries,” John said. “They did take out the croc further up the creek—in Goose Bay—that caused all the trouble.” Or was that a shark? I’ve forgotten the story.

By high tide time the wind came up—gusting to 20 knots. “Don’t know how you’re going to turn around this boat in this wind,” worried John out loud.

“I’ll wait for a lull,” said Gunter, both engines revving. “Here it is. Down to 13.” He immediately began backing and turning at the same time. The wind gusted again, but we were out of our predicament and on our way. John was at the helm, deftly skirting the sandbars in his head (since they are not visible at high tide.) I sat at the nav station and watched us repeated our Track from last year, saved on the computer’s MaxSea system. Soon we turned out of mangrove-lined Vine Creek into the wider Pioneer River. At the entrance to the sea, the wind on the nose combined with the incoming tide had built up steep, rough chops. The discomfort was short-lived, however, and by the time we were changing directions and rounding Flat Rock, we were able to unfurl the jib and shut off the engines. We were sailing for the first time in 2005!! What a fantastic feeling! We headed for the marina as all the first-mate routines flooded back into my memory: retrieve the fenders and tie them to the lifelines, take out the dock lines, cleat, coil and prepare to throw.