Back on Bliss this Sunday morning, I realize that our four-day trip to Cappadocia went by in a blur of programmed activity.  Now I have time to contemplate what we have experienced, study my resource materials, and consolidate my impressions.

Awesome.  Incredible.  Stupendous.  There are not enough adjectives to describe this mythological, fairy-tale land, a veritable cradle of history.  There is no place in the world like it!  Fortresses dug into mountains.  Churches carved into canyons.  Multi-story, underground cities hidden underneath fields and houses.  I feel very fortunate to have had the opportunity to experience all of this.  If you go to Turkey, do not miss this wonderful Anatolian interior.

To begin to understand this magical, moonscaped land—New Zealand’s Lord of the Rings and Alice in Wonderland combined—one has to understand how it was formed, because—in this case—geology is history. 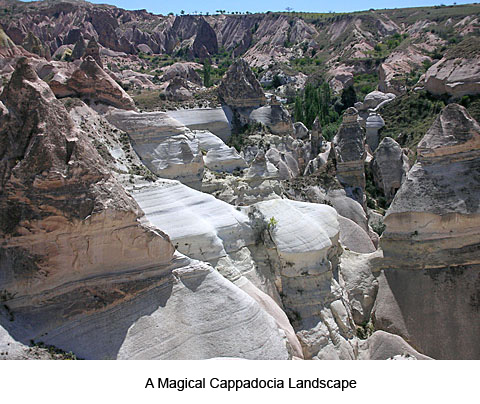 Begin with millions of years ago, when three mountains formed the points of a triangle and then erupted.  Lava flowed from the mountains of Erciyes to the east and Hasan to the west, burying a vast interior lake that had nestled between them.  The erosion of wind, water and volcanic ash carved out colorful canyons, hundreds of caves, and unique rock formations the Turks call “fairy-tale chimneys.”  Man arrived in the area sometime after the lava cooled.  This could have been 10,000 years ago.  Archeologists have discovered remains of ancient civilizations on the northern plateaus of the Taurus Mountains.  In one of them, a Neolithic settlement called Catatroyik, in the province of Konya, wide-hipped mother goddess statues were found—along with refined jewelry, colored ceramic objects, and the usual pots and pans.

What makes this area so interesting is that legend, history and geology come alive.  Even today, the potters of Avanos, our first stop, use the same techniques and the same type of wooden kick-wheels that potters used in the Early Bronze Age (3500-3000 B.C.).

Our tour began on last Wednesday, on the way to our hotel in Goreme.  Our day had begun very early, our alarm waking us up at 4:15 AM for a 5:00 AM pick-up at the town harbor in Cesme.  After an hour’s drive on the modern freeway that cuts through the mountains on the spine of the peninsula, we

arrived at the airport in Izmir.  Then we took an early morning flight from Izmir to Kayseri.  Departing the luggage carousel, we saw a man holding up a HOFMANN sign.  We followed him to a waiting van with about 10 other tourists.  We weren’t quite sure where we were being taken, since the driver did not speak English.  But after 30 minutes or so, we were transferred into another van, and with 18 other travelers, we started off again, still not sure what was happening.

I turned to a couple seated behind us.  “Do you know where we are going?”

“No,” laughed the friendly red-head as she tossed her long curly hair, “obviously you don’t either.”

So much for being “in control” on this, our “private tour!”   We talked awhile to the couple, Eva and Alan, from Melbourne, Australia and became fast friends.

The mini-bus stopped at a cave pottery atelier and there an English-speaking guide, Murat, somehow became attached to our group.  Murat began explaining the techniques still used today by the potters of Avanos, as a dark-bearded, clay-covered artisan sat at a potting wheel, kicking it periodically to make it turn—the same technique used for thousands of years.  He carefully molded the clay to fashion a sugar bowl and cover in a distinctive Turkish style.

Upon our return to the mini-bus, the tour began to make sense.  Murat stood in the aisle and talked while we bumped along, telling us about the formation of the Devrent “pink valley,” so named because of its red clay soil.  We stopped to take photos of the strange rock formations the Turks call “fairy chimneys.”  We passed through the Pasabaglari Valley, also known as Monks Valley.  Formations that looked like monks, camels and dolphins were duly pointed out, just as in a tour of Southwestern U.S.  But there the resemblance ended.

You cannot experience the wonder of the Goreme Open Air Museum anywhere else in the world.  Murat walked alongside, pointing out the cave homes and churches of the many peoples who had inhabited this valley in the past.  It was mid-day, without a cloud in sight, the high sun burning the white landscape of porous rock and caves.  Gunter turned to me, “Just like in Valley of the Kings in Egypt, they schedule a tour in the hottest part of the day.”

I grimaced, “Whatever happened to our rule, ‘only mad dogs and Englishmen go out in the heat of the day?’ This is usually our siesta time.”

“Except that we haven’t even had lunch.”

“Well, as we always say, touring is not for the weak.”

The Goreme Museum is one of Turkey’s UNESCO World Heritage sites, and even though our timing could have been better, it is not to be missed.  After hundreds of years of erosion, the softer rock and soil were eroded away, leaving the hard cap rock on tall pillars that formed the fairy chimneys and other formations.  The Christians taking shelter in the valleys of Goreme because of Arab raids named the place “gore emi” meaning “you cannot see the place.”  The Valley of Avcilar was deemed quite suitable by the Apostle Paul for the training of missionaries.  For hundreds of years, Goreme continued to be the site for such training, becoming one of the important centers of Christianity between the 6th and 9th centuries.

We walked up and down hills and valleys and in and out of a number of the amazing churches dug into the soft rock: Tokali (Buckle) Church, Cankli (Sandals) Church, Church of the Mother Mary, Elmah (Apple) Church, and Church of St. Barbara.  But the most well preserved of all of them was the Karanlik (Dark) Church.  Because of the cost of the extra preservation work, there was an extra 5 lira charge per person.  We were amazed to find that only 3 couples out of the 20 on our bus paid the extra fee to see it!  We had Murat, with all his in-depth knowledge, to ourselves.

The lack of light due to only one small window gives the Dark Church its name.  But perhaps because of that, the paintings are still vivid and lively.  Scenes from the Bible are depicted throughout the walls and dome, including the Last Supper, the adoration of the Magi, helping the sinful, the baptism of Jesus, the betrayal of Judas, and most of the apostles.  Many of the people whom the missionaries taught could not read, so the murals were a way of explaining the Bible stories in pictures. 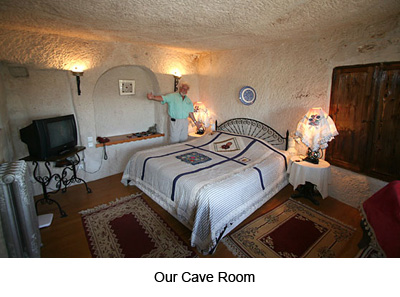 We stopped at a hotel restaurant for a mediocre lunch, joined by the hordes from numerous tour busses.  Then we were delivered to our hotel, Cappadocia Cave Suites.

We loved our cozy cave hang-out the moment we walked in.  Our suite was #107, featuring a spacious bedroom with two side chairs and a little table in front of a balcony that one stoops to walk onto—through the paned door-windows.   Turkish handmade carpets adorn the wood floors and embroidered lace squares—matching the bedspread—cover the two lamps. Kitschy, silver radiators hug the walls. A separate “cave bar” is carved into an alcove off the entrance hallway.  The bathroom features a whirlpool bath and heated towel bars.

We crashed for while, and then strolled through the town as dusk fell.  Awesome!  The town of Goreme was inhabited by many civilizations prior to the time of Christ.  In fact, the center of the town has a monumental Roman tomb. I found it amazing to realize that I could be walking along the same paths as the ancient Hittites, the Phrygians, the Medes, the Persians, and the armies of Alexander the Great and Julius Caesar.  So much history!

We ate on the upper balcony of the Alaturca with a nice view of the village as the sun set.  Gunter was not enthused about the manti (Turkish ravioli) he ordered, based on the Lonely Planet’s Author’s Choice. My lamb was excellent. 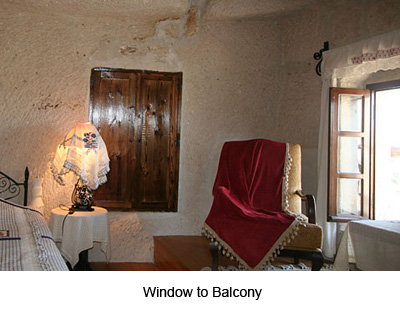 We trudged up the hill back to our cave, barely able to punish our bods anymore.  It had been a long first day.