Tiptoeing through the Tulips
by Lois Joy 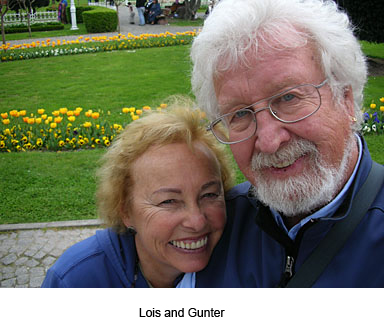 Tulip Mania. We are fortunate to arrive in Istanbul—on our way back to Pacific Bliss at Marmaris Yacht Marina—during the spring tulip festival.  The tulip is the national flower of Turkey.  I’ll bet you thought tulips originated in Holland.  So did I.  Here in Istanbul, the only city in the world to straddle two continents, I received a surprising update on world history.  It turns out that tulips came to Holland via Turkey, the only country in the world to call one of its major eras of national history—the years 1700 to 1730—the "Tulip Period." And how that era got its name is a story unto itself.

Tulips, even in the early 18th century, were nothing new to Turkey. Along with other bulbous plants such as the narcissus, the hyacinth and the daffodil, tulips had grown here for centuries, both wild and domesticated.   The Tulip Period took its name from a hobby which started as court fashion, grew into a fad, and finally exploded to an international speculation in bulbs.
Different varieties of tulips grow wild in North Africa and in Europe and Asia, from Greece and Turkey all the way to Afghanistan and Kashmir.  Occasionally they are even found growing wild in southern France and Italy, which has led some botanists to speculate that they may have been brought back by the Crusaders.
Even the Persians were familiar with tulips, admiring the flowers wild. But even as decorative motifs, they were never as popular as the narcissus, iris or rose.

The Turks had a different relationship with tulips. They cultivated them in flower beds and window boxes.  They used the flowers as patterns on textiles and rugs, tiles and buildings, fountains and tombstones. Their name for the tulip was lale, but another Turkish word, dulband, or "turban," is the origin of our English name, probably due to shape of the flower.
For Ottoman officialdom in 16th-century Istanbul, gardening was a restful hobby, a respite from the pressures of the job. Miniature paintings from that century show an air of relaxed formality in Turkish gardens.  On one side, a willow or wisteria might be trained up and over a trellis for shade. Another side might have stepped terraces of brick leading up to a fountain jetting water into a formal pool. There the Turks planted their prized tulips, marching them in rows of red, yellow and striped.

Then, in 1554, an Austrian flower lover noticed the tulips on his way to Istanbul. He happened to be the Austrian Emperor’s ambassador to the Sultan at Constantinople, Ogier Ghislain de Busbecq.

He wrote, "As we passed, we saw everywhere an abundance of flowers, such as the narcissus, hyacinth and those called by the Turks tulipan, not without great astonishment on account of the time of the year, as it was then the middle of the winter, a season unfriendly to flowers. . . . The tulipan . . . have little or no smell, but are admired for their beauty and variety of color."
De Busbecq carried seeds back to Vienna and a few years later, in 1559, Konrad Gesner, the Swiss naturalist, saw garden tulips growing at Augsburg, Germany, which he described as having "one large reddish flower, like a red lily." The picture of a tulip in his gardening book of 1561 is the first known in Europe.

The blossoms not only excited the curiosity of European scholars, but also that of enterprising florists. In no less than 10 years after de Busbecq had carried the first seeds back, a trader in Antwerp, Belgium, had imported the first shipment of bulbs from Istanbul; a year or two later they had reached Holland. And so the Dutch tulip industry was born.

By 1620, tulips were regarded as de rigueur for every palace garden in northern Europe.  Tulipomania broke out.  In Holland, one day in the early 1630s, a single Viceroy Tulip bulb changed hands. Its price, paid in kind, was as follows: two loads of wheat, four loads of rye, four fat oxen, eight fat pigs, twelve fat sheep, two hogsheads of wine, four barrels of eight-florin beer, two barrels of butter, 1,000 pounds of cheese, a complete bed, a suit of clothes and a silver beaker.

The whole was valued at 2,500 florins. About the same time, one bulb of Semper Augustus was sold for twice that sum, plus a fine new carriage. Another single bulb was considered a lavish dowry; a fourth was exchanged for a flourishing brewery. 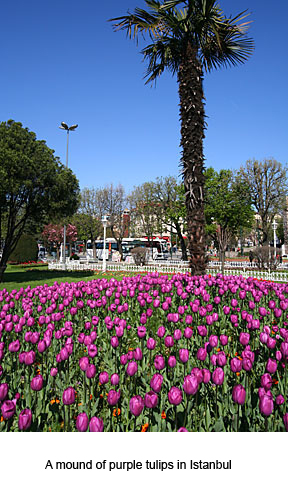 In the end the market, weakened by heavy trading in tulip futures—paper purchases of bulbs to be dug the following summer—collapsed in a few scant months. Hundreds of fortunes were lost; the court of Holland had to step in to restore fiscal stability.

Back here in Istanbul, meanwhile, the tulip business went on almost as usual. True, prices were up in response to foreign demand. And regularly the rumor would make its rounds in the marketplace of an international cloak-and-dagger plot concerning the elusive "black tulip," the one color no one could produce. The florists' guild increased its membership, and more gardens were laid out.  At the palace, the demand for tulips remained high.  But the Turks in the 17th century were more practical than the Europeans; they were not about to throw away their fortunes on a mere bulb.

However, that attitude changed in the early 1700s, when what had happened in Amsterdam 100 years earlier occurred in Istanbul!  It was called tulip madness.  And here is where I discovered an interesting tidbit of Turkish history:

Sultan Ahmet III, who ruled the Ottoman Empire from 1703 until 1730, liked flowers and loved garden parties. A short time before his reign began, the final Turkish siege of Vienna had failed, and the empire was forced into the humiliating Treaty of Karlowitz (1699). By the terms of this treaty the Empire was forced to sign away to European powers large pieces of territory in the Balkans. Istanbul was anxious to forget about war and defeat. The new ruler wanted to promote peace. He was into flower power.  “Better flowers than battles,” he said.  The Turkish society was ready for a little light diversion.  So it readily embraced the tulip fad.
The Sultan’s spring palace garden parties were spectacular diversions. Days before the big event, agents combed the local market for thousands upon thousands of local blossoms.  Servants carefully placed them in colored bottles in the garden beds to supplement the plantings. They placed lamps and candles along the paths and above the beds for delightful evening parties.  At one such party, dozens of tortoises with small lanterns tied to their backs plodded among the flowers.

Soon the city aristocracy entered the game, competing among themselves not only for the most novel garden entertainment, but more seriously for the best blooms. Tulip shows were held, often under palace patronage, with the best-of-show tulip receiving a certificate of merit signed by the Sultan himself—as well as a purse of gold.
Tulip how-to books were written by the dozens.  They fueled the fire and the tulip craze spread, with all the accompanying wheeling and dealing that one might expect. It was Amsterdam of 1637 all over again. And as in Amsterdam, the government finally had to step in to cool off the market. In 1726, the head of the palace flower gardens was ordered to call a general meeting of all city tulip dealers. At that meeting he announced the establishment and enforcing of price controls.  Each dealer was to list all of his varieties. A price for each was given and that price was to be maintained in the market. Violations would be punished by confiscation of stock and the exile of the offending merchant.  The price freeze worked; at least, speculation died out.
But the tulips in Turkey did not die.  They continue to be the mainstay of every planted garden in Turkey. Ataturk's revolution uprooted nearly every traditional Ottoman institution except for the tulips. 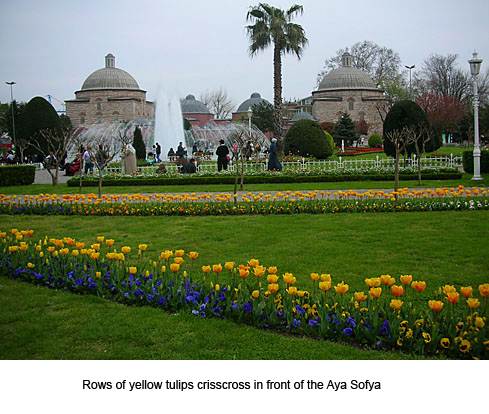 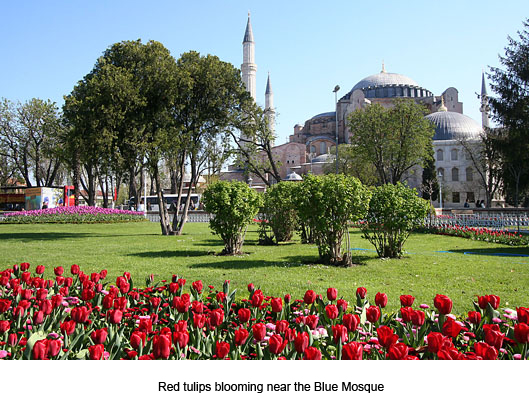 The Modern Tulip Festival.
The weather is brisk, but there are tulips blooming everywhere! Istanbul must rival springtime in Holland!  As we leave our room at Empress Zoe in the Sultanahmet, we step out into their courtyard filled with bright yellow and red blooms.  During our first day in Istanbul, we are exploring on our own.  Then we will have a guide for two days.  I was surprised to see so many groomed gardens of tulips throughout the Old City, from in front of the Aya Sofya—a few blocks from our hotel—to the gardens of the Blue Mosque.  As we take it all in, we stroll toward a bandstand in one of the gardens with a sign, 3rd Annual Tulip Festival.  That’s when we realize that we have inadvertently stumbled onto one of Istanbul’s most special weeks of the year. 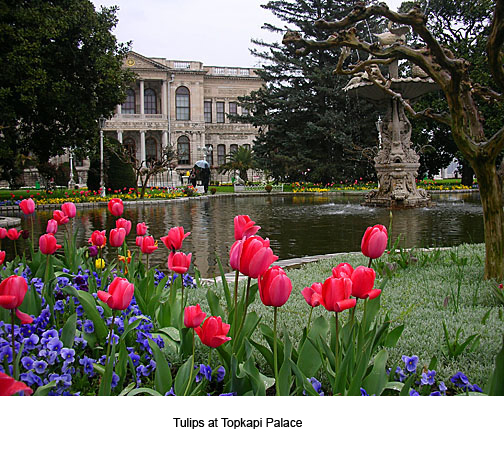 In The Turkish Times, I read that the festival's opening ceremony has already been held at Taksim Square, but that the Festival will continue through April 13th.  There will be concerts, painting and sculpture exhibitions, and competitions featuring the year’s “100 most beautiful Tulips.”
“We planted 12 million tulips all across Istanbul this year. Some believe we spend too much money on tulip planting. We have spent YTL 2 million on tulip bulbs since the beginning of the year," said Istanbul Mayor Kadir Topbaş, who delivered a speech at the ceremony, stressing that tulips are a part of Istanbul's culture. That’s one bulb for every one of Istanbul’s 12 million inhabitants.  Not bad.
For me, the Festival is photographer’s heaven.  It provides me with the opportunity of photographing tulip gardens in the forefront of every wide angle shot!