A Special Corner of the World
by Lois Joy

There is this special place where three countries meet: Germany, Switzerland, and Austria. A beautiful alpine inland lake links and separates them. The locals call it Bodensee; the tourists call it Lake Constance.

The borders in the middle of the lake are neither delineated nor precise. But that’s O.K. Because that description also reflects the free and easy attitude of the people who live there. Ferries ply the lake and drop its passengers off wherever; there are no formal border crossings. 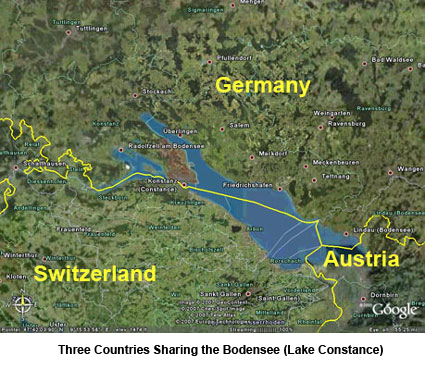 The climate of Lake Constance is mild and Mediterranean. Often, the Lake surrounds itself in a mist that evokes memories, fantasies and dreams. One of those lakeside dreamers is our cruiser friend, Dietrich, who lives in the little village of Daisendorf. He ran around the lake during marathons and swam it during triathlons. When he retired, he undertook a circumnavigation of the world in his catamaran, Island Express. He met his wife, Peta, in Queensland, Australia—another sailor who shared the same dream. Gunter and I met them a few times during our own circumnavigation. The most recent encounter was in Salalah, Oman—where Dietrich flew in with a critical part for the Catamaran Windpocke, helping its owners' crew through Pirate Alley as part of our Camel Convoy. (See story.) We vowed to keep in touch. 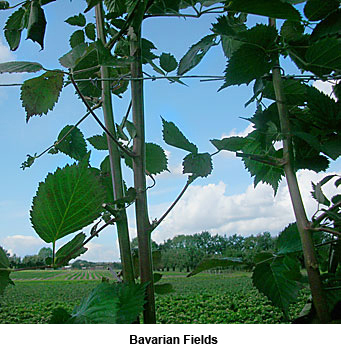 During our visit to relatives in Munich, Germany, Gunter and I undertook a three-day road tour to Bodensee. It was a pleasant drive through the Bavarian countryside. As we drove south, the lush rolling hills morphed from fields of hops to vineyards. Characteristic of the region, ruby red geraniums graced the omnipresent window boxes hung from the balconies of every home and Gasthof (Guest House/Hotel).

Our first view of the lake was everything we had hoped it would be—and more, a deep blue sapphire ringed by impressive, snow-capped peaks. We followed the road winding through the bustling town of Friedrichshafen and the village of Meersburg with its ancient castle, until we reached Daisendorf. Our friends Dietrich and Peta welcomed us with open arms as cruisers do the world over. 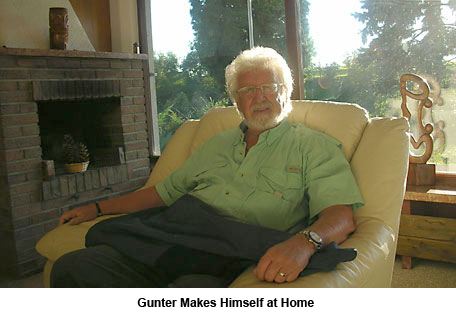 First, we stretched our legs with a hike from the village to an ancient chapel dating from 1508 harboring unique Renaissance frescoes. As we walked up a hill and inside the chapel, I admired the intricate detailing of the altar. Then my gaze turned upward, to the typical scenes of heaven on the ceiling, admiring the soft pastels. Then I spotted an unusual fresco, men in medieval costume, on top of a hill, surrounded by animals.

“What’s that?” I asked Dietrich. 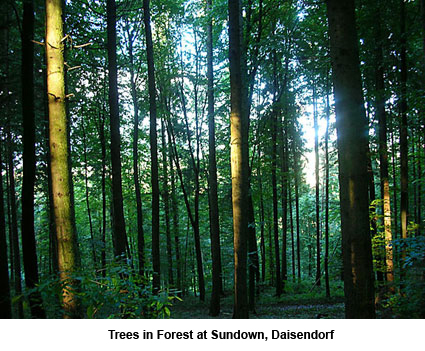 “That fresco shows the men who selected this site for the church; it was carefully planned to be built here on the very hill we hiked and overlooks the scene—the rolling hills— you just admired.” 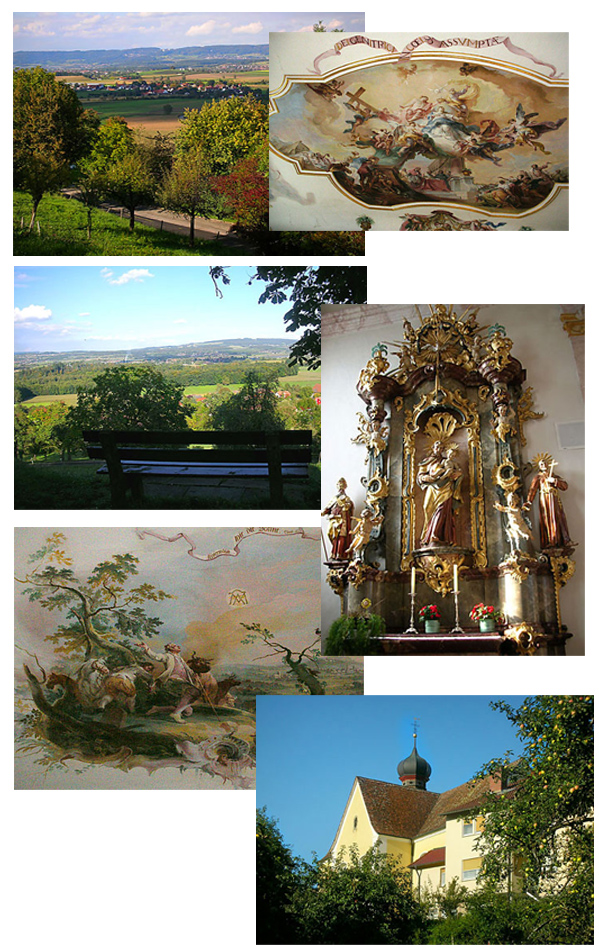 But that wasn’t the only thing that was special on this, our first day in Daisendorf. On the way back, we tramped through a small forest, autumn leaves crunching through the hushed and humid air as the setting sun danced around mossy tree trunks. Although the area is well populated now, with the village close by, we never met another kindred spirit. Tramping along silently, my thoughts were transported back to the beginnings of Daisendorf in the 8th century, and then to the marvelous frescoes of the 16th century. So much history, so many footsteps. Had they tramped this same forest?

Afterwards, we enjoyed a traditional German dinner at a nearby restaurant. With so much in common, we talked cruising—and life after cruising— far into the night. 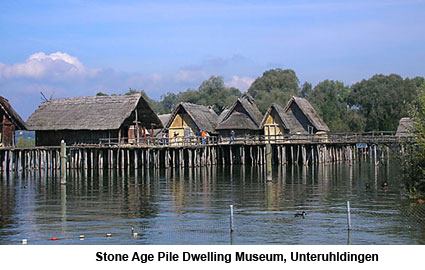 Morning brought a full day of sightseeing. Our first stop was Unteruhldingen, a charming hamlet popular for its open-air Museum of Archaeology. I had a great time photographing their models of Neolithic and Bronze Age stilt houses. 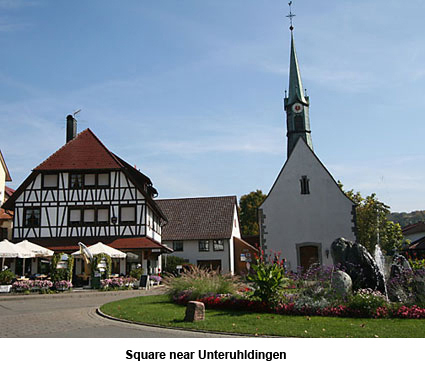 Next we took a ferry across the  Bodensee to the Swiss side and drove up a scenic mountain road to St. Gallen, a well preserved medieval town. St. Gallen was founded around 612 AD by a careless monk forging his way through the valley of the river Steinach. As legend has it, the holy but clumsy St. Gallus fell into a briar patch, considered it a sign from God, and decided to build a hermitage there with the help of a bear. The place became St. Gallen, and the bear is still the city's standard. From this dubious beginning, by the 8th century, St. Gallen developed into a thriving cultural center. Today it is Switzerland's seventh largest city.
After searching for a parking place, we walked past typical modern European shops to the monastery. Upon entering the famous Abbey Library, the world's oldest monastic library, we were asked to don huge fuzzy slippers to protect their floor. Absolutely no photos were allowed—not even of the neat rows of fuzzy slippers! The baroque interior filled with ancient tomes and old maps was an awe-inspiring sight, well worth the small admission fee.

With a lot more to see, we drove back down to the Lake, but instead of taking the ferry again, drove around to the lake and over the Rhine. We stopped in Constance (Konstanz), a university town with population of around 80 000. It was settled by the Romans in 100 AD, but some believe that this area was inhabited as far back as the Stone Age. The town is named after emperor Constantius Chlorus. Konstanz owned the only bridge over the Rhine in the area, which transformed it into a prosperous strategic trade center. 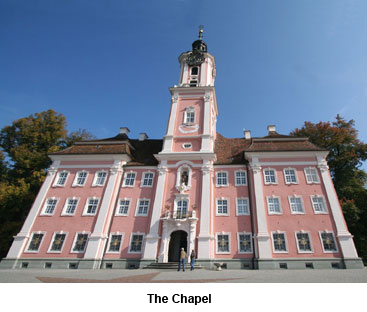 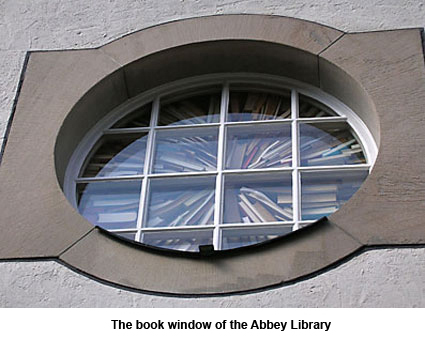 Three towers remain from the Middle Age city wall, one of which marks the place of this bridge. Konstanz was granted the status of Imperial City in 1192. It was here that religious reformer Jan Hus was burned at the stake.

After we drove through the town and then parked in a city park where our friends led us to a group of quite playful and unusual statues cavorting by a fountain. After we took photos of the sculptures there, we took a pleasant drive, enjoying the view of vineyards gently sloping to the Bodensee. Dietrich managed to find the way to Lenk’s home, where we marveled at a wide array of sculptures as the sun set. For more information on this amazing artist, access his website
What a perfect day of sightseeing! 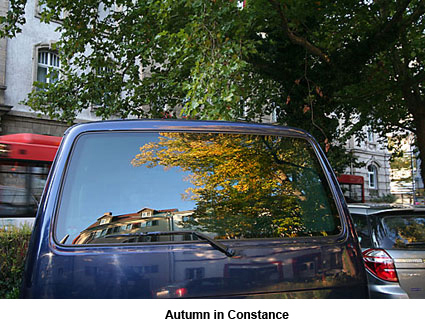 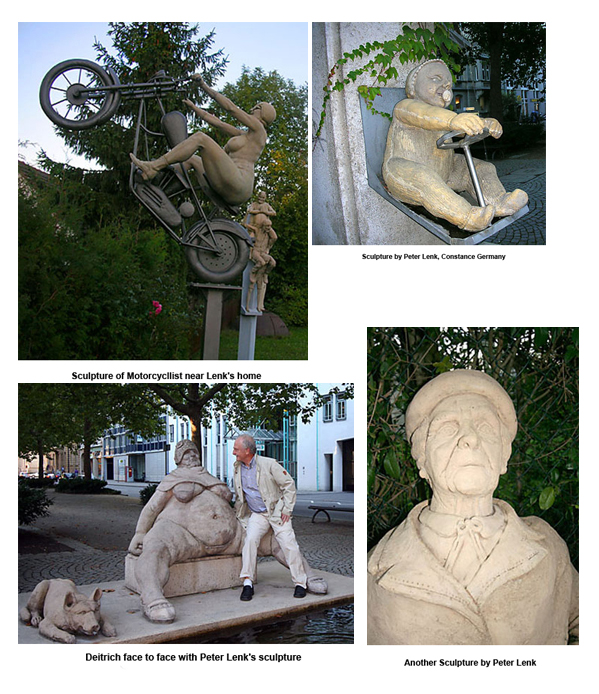 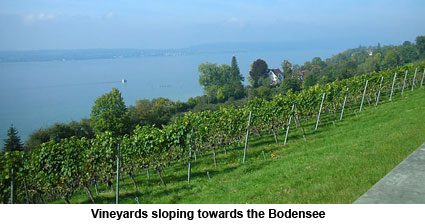 The next day on our way back to Munich, we exited the Autobahn where a sign pointed to a church. We wound around back roads to find it, but once there, it was worth the exploration. Inside, as we gazed upward at the sun’s rays fanning from the circular ceiling, we marveled at the architect’s imagination. 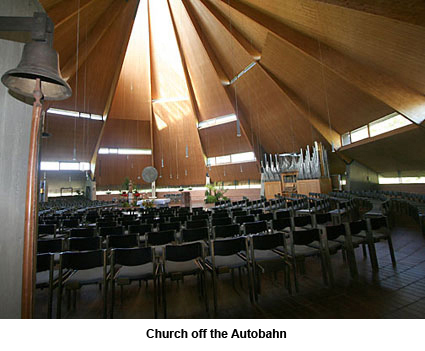 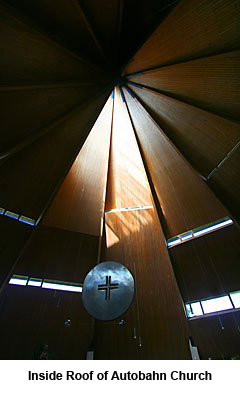