My First Oktoberfest
by Lois Joy 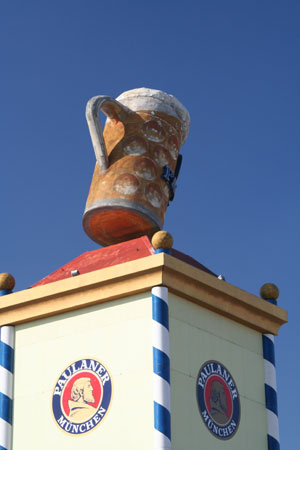 We came here this time of the year, not solely to experience the OktoberFest, but because of the good weather. On many previous visits, it has been rainy and cold. The City of Munich knows something about when to attract 6 million visitors to their fine city of 1.5 million residents; that is why they begin their Festival during the last part of September. We were lucky to have a perfect day with the sun blazing down as if we were in California. The very next day, a cycle of rain settled in and a chill permeated the fresh autumn air.

The following is the promotion from the
Oktoberfest Website:
Think Germany and most people think of Oktoberfest -
huge steins of beer, singing, platters of sausages, men dressed in Lederhosen and ladies dressed in Dirndls. Oh, and 100,000 or so other people to party with! Held the last two weeks of September into the first week of October because of Munich's great fall weather, Oktoberfest has been a tradition for almost 200 years. 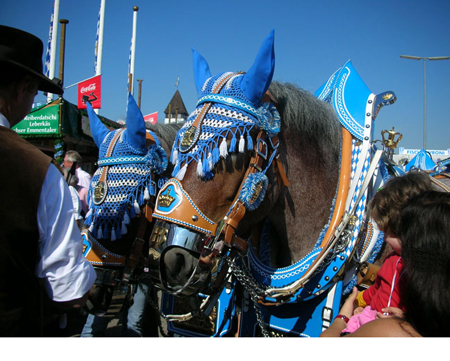 Oktoberfest is one great big international celebration, a 16-day party with visitors from all over the world. Gunter’s relatives here advised us that the opening week-end would be jammed, so we opted to attend on the first Monday. We dutifully watched the opening ceremonies on TV. beginning with the mayor of Munich tapping the first barrel of beer and making the traditional announcement “O’zapft is” (“It has been tapped”). During the ceremonial opening of the fest, the families of the festival hosts and breweries arrive in coaches adorned with flowers. The bands of the festival tents, the waitresses in decorated carriages and the magnificent horses and carts of the Munich breweries enter the festival-grounds. This procession is lead off by the “Münchner Kindl” – Munich’s symbol figure – on horseback, followed by the festival coach of the Lord Mayor of Munich. 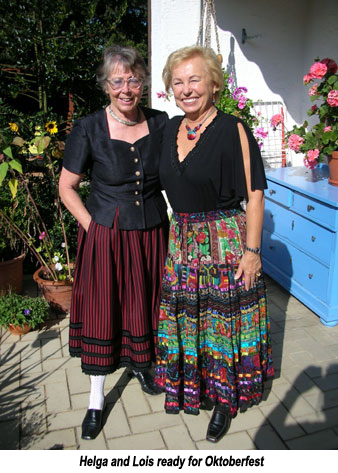 What I do want to attend next time, though, is The procession of folklore and marksmen groups always on the first Sunday of the Oktoberfest. Some 9.400 persons from Germany, Austria, Italy, Croatia, Romania, USA and other European countries participate in this festival parade which is some seven kilometres long. Highlights are historical uniforms, marksmen, folklore groups, local bands, bandsmen and thoroughbred horses. This folklore procession was held for the first time in 1835 on the occasion of the silver wedding anniversary of Ludwig I. and Therese von Bayern.

“Who are they?” I asked, and before you know it, I was deep into history going back centuries:

While we all know it as Oktoberfest, the actual German term for Oktoberfest is die Wiesn - a contraction of the word "Wiesen" which means meadow or field. The original Oktoberfest was held on the fields in front of the city gates which were later renamed "Theresienwiese" (Theresa's fields).

The first Oktoberfest was actually a wedding celebration party. Prince Ludwig of Bavaria, who was later crowned King Ludwig I, wanted the people of Munich to share in the celebration of his marriage to Princess Therese of Saxony-Hildburghausen on October 12, 1810. He organized a horserace, offered copious amounts of beer and food, invited all the people of Munich and voila! Oktoberfest was born.

The festival was such a success that Ludwig decided to hold it again the following year in conjunction with the state agricultural festival. In 1816 carnival booths were added and in 1819 the town fathers of Munich decided that the festival should be celebrated every year. Over time, the length of the festival was increased and the date moved backward because of the great weather at the end of September in Bavaria. 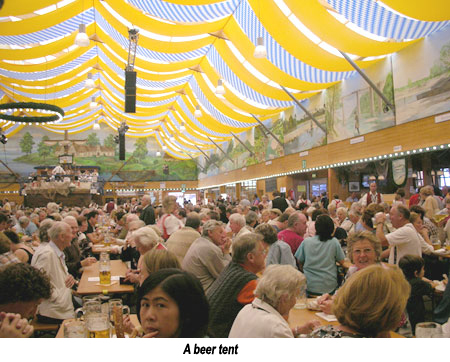 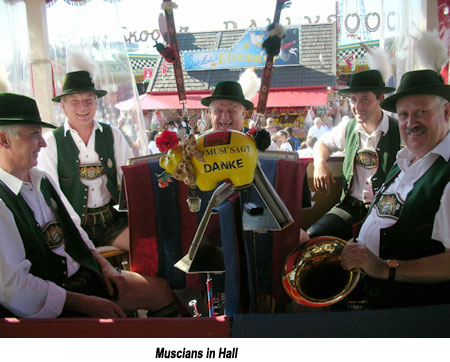 Since its beginnings the Oktoberfest has thus been canceled 24 times due to war, disease and other emergencies. By 1960, the last year that horse races were held, Oktoberfest was already a world-famous festival. The mother of approximately 2,000 “Oktoberfests” celebrated at different venues and in varying measures all over the globe, Oktoberfest Munich is the king of festivals. Prost! Here’s to King Ludwig and Therese! 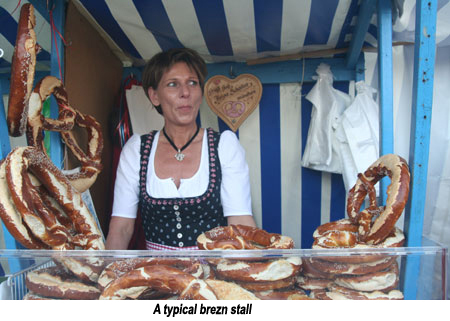 So as we left the Sbahn and the Ubahn and walked along a street named Theresienwiesestrasse, I was getting the hang of these long street names, “Aha, the street of Theresa’s meadow!” First, we walked along a long open area lined with tents—some small tents—others changed to giant brewery-sponsored beer halls that can hold up to 5,000 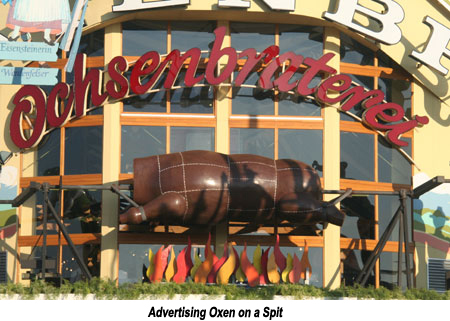 people apiece. Frescoes even emblazon the ceilings! We stayed the full day and left in the early evening. I understand that this is when it really gets wild in these tents, though, with exurberant dancing on the long tables! Granted, at the main and side entrances to the beer tents vendors are selling giant Oktoberfest pretzels, bread rolls, salt sticks, foot-long sausages, and even fish sandwiches, etc. In addition, there are stalls selling sweets, ice cream, fruit juice, fruits, espresso and souvenirs. 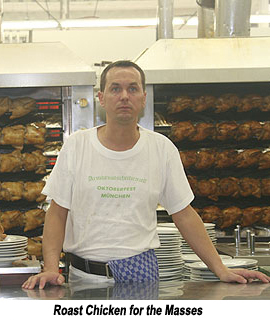 But one goes into the tents for the wonderful food. How they can prepare it so well in such large quantities is a mystery to me, but our grilled beer-batter chicken was out of this world! Imagine preparing 460,000 chickens and 104 oxen! Of course, I had a lesson in how to hold and drink the special Oktoberfest beer out of giant mugs ! 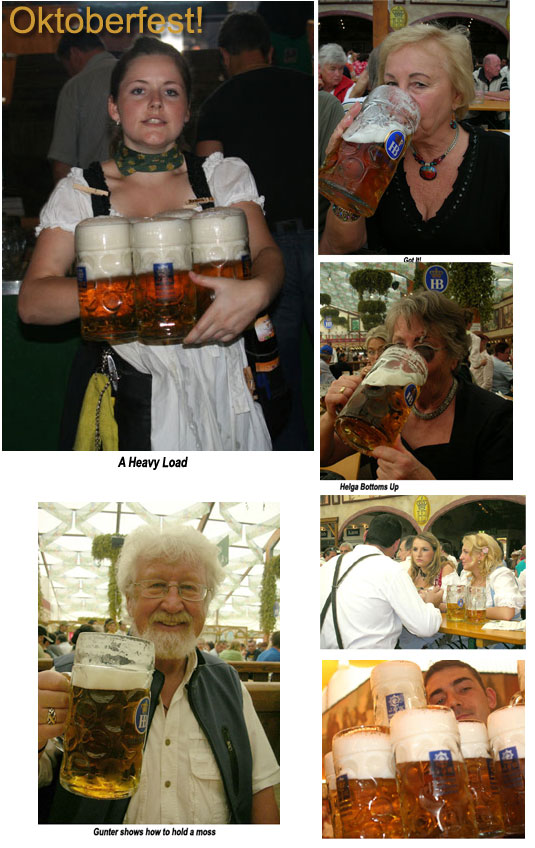 On full stomachs, we sauntered through the fairway, filled with the usual games and rides that one would find in a typical State Fair in the States. Here are some views from the Ferris Wheel: 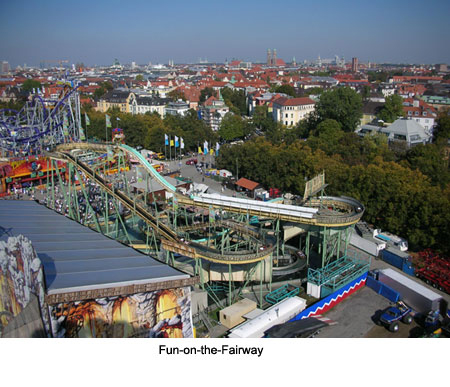 A bigband open-air concert of all Oktoberfest bands with some 300 musicians took place on the second Sunday of the festival. For the grand finale of the Oktoberfest on the last Sunday, some 60 marksmen saluted their farewell accompanied by the band of the marksmen’ tent. But by then, we were on our way to Sudtirol (South Tyrol), Italy, the subject of my next story (see Snapshots of Sudtirol).

Der Spiegel reported that this year's Munich Oktoberfest ended with new records for beer and oxen consumption and for the number of false dentures found. “Rowdy it may be, but the festival, just like last year's World Cup,” the newsmagazine reported, “seems to be exporting a positive image of Germany. The 174th Munich Oktoberfest closed its beer tents on Sunday after 16 days of debauchery that attracted 6.2 million visitors who drank 6.7 million liters (the equivalent of 11 million pints) of beer, ate 104 oxen and lost three sets of false teeth. Some 50 lost children were also recovered.”