Messing with Boats Part VIII : Lessons Learned
by Gunter
Pacific Bliss is on the hard in Marmaris, Turkey. We have sailed over 30,000 miles with only one season to go (from Turkey to France) before the big circumnavigation party. As I sit here back in San Diego, I’m thinking back on the lessons learned so far, many of them the hard way. It’s my hope that the following list will help other cruisers avoid some of the bad situations which we found ourselves in. 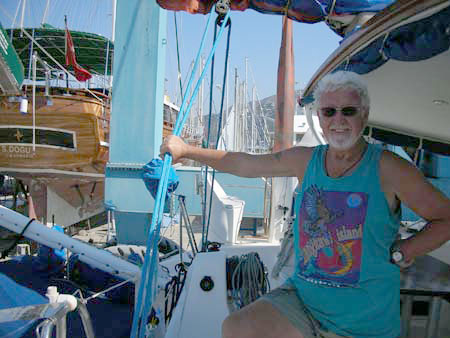 1. Dinghy
Our dinghy went walkabout twice, once because of a sloppy tie-up, the second because the painter broke. We are lucky because in both circumstances other cruisers noticed it before we did and retrieved the dinghy for us. However, if you the only yacht sailing in a reef strewn area, retrieval might not be so easy.

We now carry small inflatable kid’s boat with paddles to go after a dinghy where we could not go with the boat. If the dinghy would be lost, this little contraption allows you to at least paddle to shore.

2. Navigation
Laptops: We found the typical life of a laptop on our catamaran to be about two years. We buried two laptops, and have now three functional laptops on board. We installed electronic charts on all three of them and practiced quick replacement and correct connection ports to the GPS.

GPS: We carry two handheld GPS on board and have also the built-in GPS. We make sure that the handheld GPS are compatible with every laptop. If there is lightning around, we always put the hand held GPS into the microwave oven, which acts like a Faraday cage, keeping electromagnetic radiation outside.

Test Equipment after a Lightning strike: We got hit by lightning at the Raffles Marina in Singapore, lost the Autopilot instrument, and, as we found out later, also the radar. We could replace the autopilot unit right away, but we were unable to replace the radar until we reached Aden, Yemen. We should have tested all electronics after the lightning strike.
Log your position every hour into your manual logbook, in case you lose all your electronics. Then you can do dead reckoning with your paper charts and compass. Make sure you carry a full set of paper charts with you.

Navigation Lights: Twice, our red and green navigation lights went out, once as we were entering a harbor. We now carry a small portable battery-powered navigation light with us, which can be quickly clamped onto the bow. Do make sure that a flopping jib does not rip it off,; this happened to us. The white stern light can be easily replaced by a flashlight taped to the stern.

Compass: Our flux-gate compass failed in the middle of the night on the way to the Marquesas Islands. We taped our spare fluxgate compass to the fridge in the cabin and connected it to the course computer. After doing the calibration 360º all was OK

3. Spare parts and tools
We carry spare parts for most essential items such as course computer, pumps, fluxgate compass, automatic pilot, rudder sensor, hydraulic pump, toilet, engine parts, fresh and saltwater pumps, impellors, injectors, zincs, halyards, jib, hoses, valves, filters, fridge controls, refrigerant and filling meters. We’ve joked about how Pacific Bliss turned into a freighter sailboat. But all is necessary because on a circumnavigation, something will break down—and always at the worst possible time. Of course a good set of tools is needed also, together with some raw stock for emergency repairs.

We carry three anchors. One is a lightweight aluminum Fortress, which we keep assembled, tied to the stanchions, and ready for quick deployment. We learned this lesson when our main anchor chain broke in the Yassawas in Fiji. Nightfall was upon us—and with a rainstorm coming—and it took us a very long time dig down into the locker and then to assemble the Fortress out of the bag, during which time we were drifting towards a reef next to the shore. Now we can deploy the Fortress very quickly. The anchor rode is in a bag easily accessible with 30 feet of chain and 240 feet of rope. This anchor came handy in the Red Sea, where we tried 4 times to set our main anchor (a Delta) without success; the Fortress dug in the first time.

Two related lessons: (1) The reason the main anchor rode broke was a direct connection of the swivel to the anchor shaft. If the anchor is buried very well, this creates a bending moment when the boat moves around. We had been experiencing williwaws during the days were anchored in the bay, causing the boat to turn in all directions. Now we have a foot of chain between the anchor shaft and the swivel, so the swivel sees only straight pulls. (2) We were lucky to retrieve the main anchor a week later, because Lois, my navigator, writes down in the log the exact latitude and longitude of the anchor position, the depth, and length of chain out, and wind direction, which helped divers from the village to get the anchor back. (See The Anchor Story).

5. Electronics
The electronics on our boat turned out to be quite unreliable. The main cause of problems was water leaks onto electronic circuit boards. Several boxes which contained circuit boards were not sealed well enough against water condensation and leakage. We had to apply foam in many places to waterproof electronic boxes.

At times whole groups of functions ceased to operate but magically came on line again after a drying out period. This worked only when the water was fresh water coming in from rain or a wash down. Saltwater incursion led to permanent damage of some boards.

We had to bypass several relay control functions by connecting directly to the 12-volt battery bank with a simple toggle switch. In Bali, it took us an entire day in to locate a simple toggle switch (do keep spares). Sometimes we could bypass the relay controls by going into the control boxes and manually activate the required function with a slider. (This happened one night when all the lights went out, but fortunately, we could bypass the relay controls). Unfortunately, we do not have detailed circuit diagrams of the printed circuit boards. If possible insist on getting these from the manufacturer, so board level repairs would be feasible.

6. Heavy weather
In heavy weather (25+ knots) we used only the jib, reefed, running if possible. This allows fast response to squalls. During a Force 10 storm (55+ knots) off the coast of Columbia, we had the main triple reefed and were running with the waves, the boat speed surging up to 25 knots! The wind was so strong that we could not take down the main completely. The cockpit stayed dry; but the autopilot needed manual assistance. Even broaching was not a problem; starting the engines got us on the right course again. We have never buried a hull. The catamaran felt stable all the time, floating like a cork on top of the waves. We realized then that the boat could take much more than we could. (See my story, Force 10: Night of Sheer Terror).