An Unplanned Stop in Sri Lanka, the Land of Serendip
By Lois Joy

Sometimes part of the joy of traveling is encountering the unexpected. So it has been with Sri Lanka. We did not plan to stop at this little teardrop of an island southeast of India. Our plan was to sail straight through from the Similan Islands, part of Thailand’s national park system, to the Maldives. After all, we had visited the island in October of 2004, two months pre-tsunami, and already knew that stopping in Galle would be high on the inconvenience and hassle scale. But after a miserable crossing of the Bay of Bengal— not seeing the sun for six days—we were ready for any stop allowing us to escape the lumpy seas.

Sri Lanka: Land of the Blessed in the native Sinhala tongue, Taprobane to the ancient Greeks, and Serendip to the Arab traders from the Gulf, who established trading depots here centuries before the Portuguese came on the scene. For Pacific Bliss and her crew— Captain Gunter, myself, and Chris, our 24-year-old Aussie friend and helper—it has been serendipity. For despite signs of war and poverty, the country has a natural beauty and impressive history that made our visit here quite interesting. 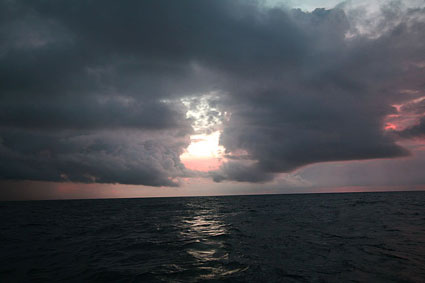 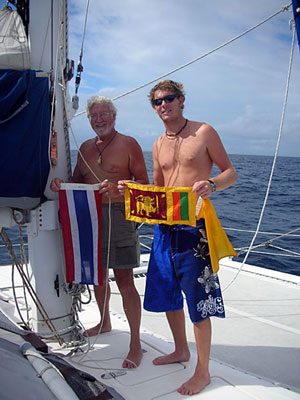 After a few days’ attention to Pacific Bliss and a little R&R in Galle, we were ready for whatever this mysterious land had to offer. We had seen the prerequisite tourist sights during our three-day, 2004 stopover, when we had stayed in Colombo, the capital— polluted our lungs riding a tuk-tuk through Colombo’s snarled traffic; experienced cocktails on the lawn of the famous colonial-ear Galle Face Hotel at sunset; and photographed the huge golden Buddha in the city park. Then we’d taken two day tours: one to visit the elephant orphanage and the Temple of the Tooth in Kandy, a second to check out the Navy port at Galle, the only point-of-entry for cruisers.

Since serendipity had put us here again, we wanted to gain some insight into the people, the culture, and yes, the ongoing civil war. It was this war that had caused us to strike Sri Lanka from our circumnavigation plan. After all, since our visit to Colombo, where the Tamil Tigers had bombed a department store, we had heard of attempted bombings of the port of Galle. Barely recovered from the December 26, 2004 tsunami, in which 6000 souls departed, Galle is a well guarded fortress of old and has been declared a World Heritage City. Until the British conquest, it was the most important port on the island, appearing in European histories as early as 545 A.D. By the time of the Arab traveler and writer Ibn Batuta, who landed here in the 13th century, it was firmly established as a center for commerce between Sri Lanka and the Arab world. The port was conquered by the Portuguese in 1505, by the Dutch in 1640, its fortifications were added to by the British all the way through to WWII. Centuries old bastions and ramparts are still being excavated by the Sri Lankan Department of Archeology. The city has numerous buildings dating from the Dutch era, including the Old Dutch Government House (now a shipping company) and the Governor’s House (now a hotel) and the Groote Kerk (Great Church).

Pacific Bliss crossed the shipping channels at 90º to Galle at dawn’s light in Force 6 winds and high seas, deviating course twice go behind humongous freighters (one does not want to cross in front since reportedly, they can take up to four miles to stop). Then we prepared to anchor outside the harbor as instructed, ready to rest after a seven-day passage.

It didn’t take long to see the guns. Two small runabouts with mounted machine guns greeted us, the men waving and showing us where to drop the hook. They were followed by a steel navy vessel. The men from the vessel boarded Pacific Bliss while the runabouts ran about, their twenty-something officers waving and smiling all the while. “New machine gun. From China,” one of them shouted proudly. When they finished with their inspection, they asked for “smokes.” Although Pacific Bliss is a non-smoking boat, fortunately we had purchased a few cartons just for this purpose. 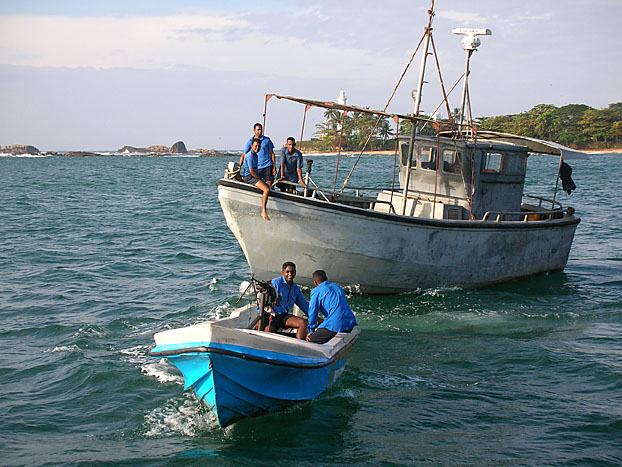 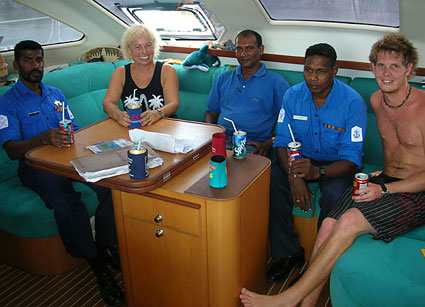 We enlisted the help of an agent, G.A.C. Shipping, to handle the rest of our paperwork. As in Thailand, three forms asked the same questions over and over. We had a two-hour wait before being shown into the harbor, but didn’t mind since we wanted to enjoy our first breakfast in a week while not underway. An officer from the navy then boarded our ship to direct Gunter to a place inside the harbor, which is roped off except for a small area for fishing boats and yachts to enter and exit. The choices were a black buoy in the center where one would need a dinghy to get to shore; Med-mooring to a floating dock consisting of wobbly plastic sections to balance on without handholds; or rafting to one of the mono-hulls along the sea wall. We chose the later, rafting to a smaller Italian vessel, dock lines strung to rusty rings on the sea wall. (The fraying necessitated buying two additional dock lines here.) We decided that we couldn’t tour until we “graduated” to a place directly on the sea wall. That took three days. Nothing happens fast around here. 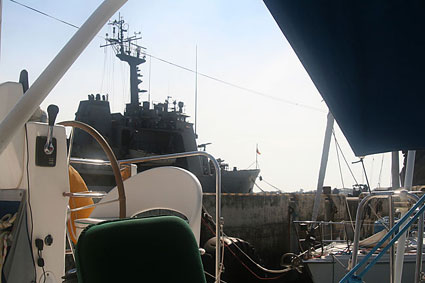 That first night, swaying in the current, our fenders crunching against the smaller boat, it seemed that we were still at sea, that is, until the first depth charge exploded. I sleep next to the outside hull, and I not only heard it, I felt it! By now, we blithely sleep through the racket, knowing that the Navy does this at random each night to thwart any Tamil Tiger frogmen from entering the port by sea and bombing their ships. Since I can see the hulk of the ship from the deck of Pacific Bliss, these random charges every night are actually comforting. Strange, how a person adapts to what he cannot change.

When we climb off our ship onto the sea wall, we walk along the huge concrete quay, past the smiling navy guys, and have gotten to know quite a few of them. We walk past the guardhouse, where the three or four guards stand watch in their cinnamon-colored, short-sleeved uniforms. 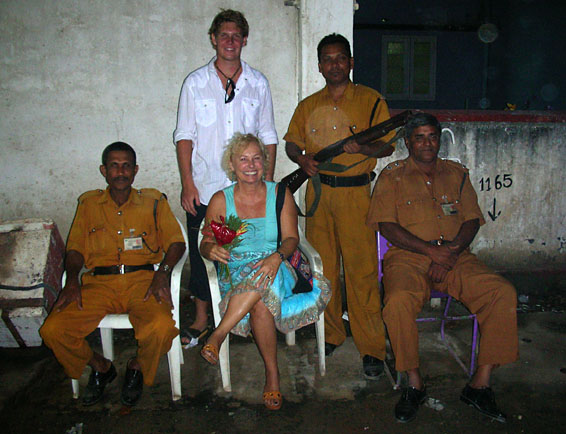 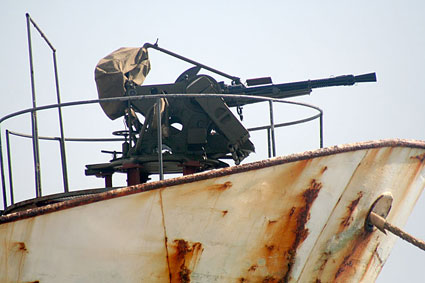 One night, Tissa, our agent, invited us to his house for a curry dinner. When Gunter, Chris and I were introduced, we realized that we recognized his wife as one of the guards! His youngest, a toddler openly stared at my white face and blonde hair, but she eventually came to sit on my lap and to finger my Thai bracelet, which I gave her. That night was one of the many Sri Lankan holidays; eventually the three-level house filled with parents, brothers and sisters-in-laws and their children. Still, they all waited, watching us while we ate the standard rice and curry with a fork and spoon. Later, I knew, they would take bowls and eat with their hands. But not while we were still there. It would be impolite to eat in front of their guests.

Our Tour. The South Coast.

Past Galle, we continued south to the home of The Lace Lady. She is not the lady from whom I bought from back in 2004 at the Old Dutch Fort. “That lady?” she said. “I think perhaps she is no longer there.” 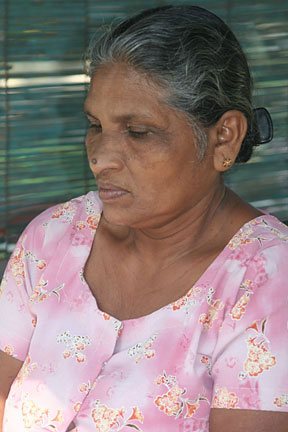 “From the tsunami?” I asked, afraid to know the answer, the answer I’d dreaded ever since I saw this stretch of devastation on TV that December 26th.

“I was afraid of that,” I said. I had given her home-made lace pieces to many of my special friends. But I purchased more gifts from this new lace lady, whose work was just as exquisite and time-consuming. A full-sized lace tablecloth takes four months to weave.

We reached the stretch of coastline known for the stilt fishermen. The stilts were there, but the fishermen were not. Our driver, Gamini, stopped anyway. A woman met me as I crossed the road to the beach. She wanted money to have two fishermen pose for me on the stilts. “They only fish in the late afternoon,” she said. “Not now.”

“O.K” I agreed. It was the first time I had paid for a photo. But in Sri Lanka, it was not to be the last. 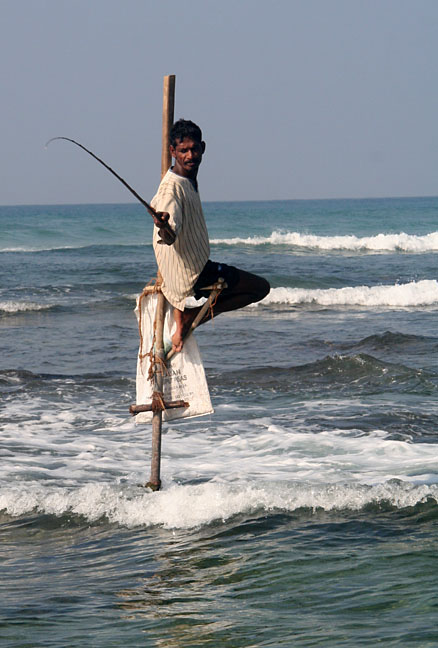 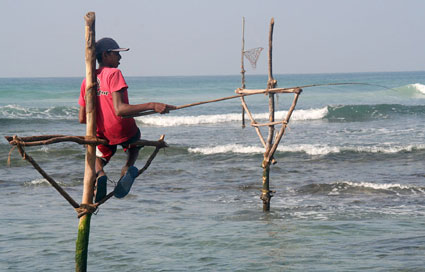 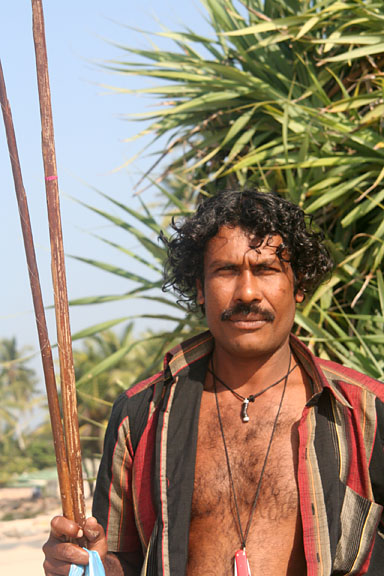 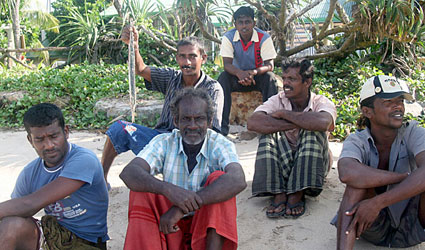 Our next stop was the Dondra Lighthouse. I was familiar with the landmark on our electronic and paper charts, so seeing it close up and personal was special. It stands on Sri Lanka’s southernmost extremity, so one can see the coast from either side.

As we headed eastward from Tangalla, the scenery changed from the lush green of the southwest to more open landscapes. We were now in Sri Lanka’s dry zone. We passed a series of salt pans, attracting shore birds such as flamingo, spot-billed pelicans, terns, gulls, ducks and hundreds of egrets.

Our goal for the first day was Ruhuna National Park (Yala), which is Sri Lanka’s most popular park and the best one for spotting a variety of mammals. We checked in quickly at Priyankara Tour Inn in nearby Tissa—a simple guesthouse, but OK since we didn’t plan to use it for more than a bed-and-breakfast. 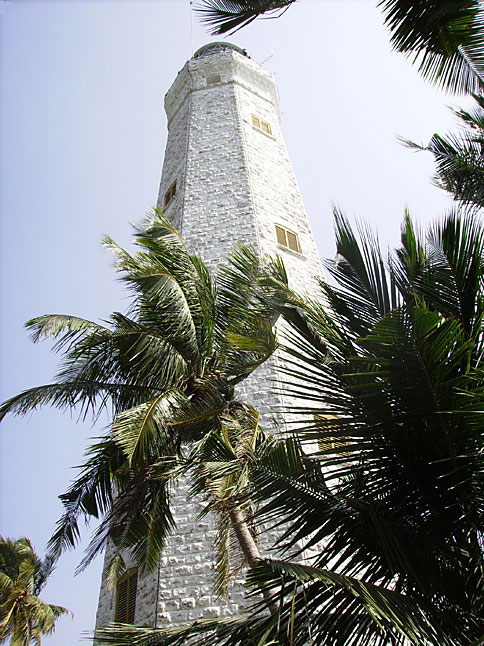 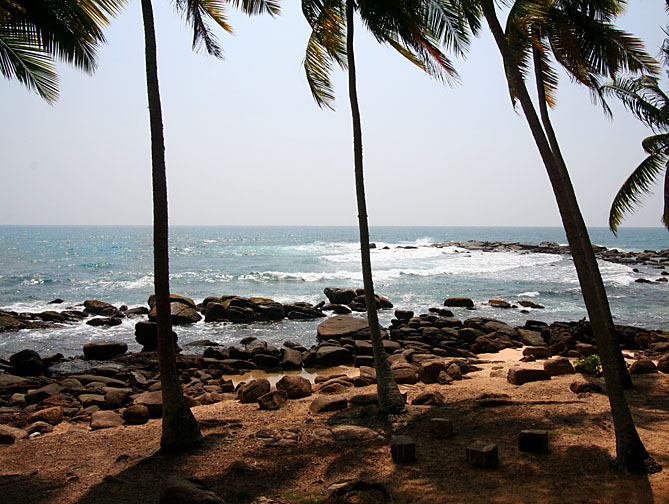 The park covers 386 square miles of scrub jungle, open savannah, riverine woodland, which rims a long stretch of Sri Lanka’s southeast coast. About 50 square miles are open to visitors. The hotel set us up with a jeep and driver and we were off, jostling and bumping for hours until darkness descended like a blanket over the park. We managed to see three elephants in the wild, a first for us. The last two were actually outside the park area—it seems they don’t know where the boundary is! The bird life was spectacular, especially the herons, egrets, and peacocks. We also saw a grey langur monkey in the branch of a dead tree—a great photo op—along with mongoose, deer, wild boars, crocodiles, jungle fowl, and lots of water buffalo. An African safari it is not; 19th century British hunters shot thousands of the region’s elephant and leopard, and poachers continue to take illegal game. 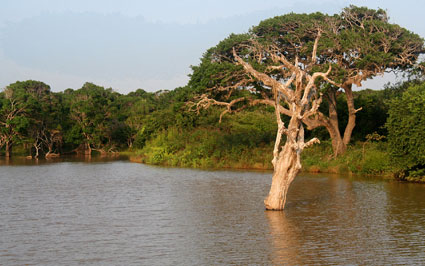 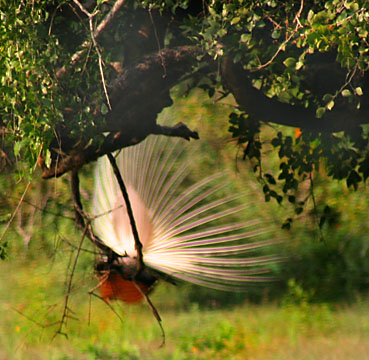 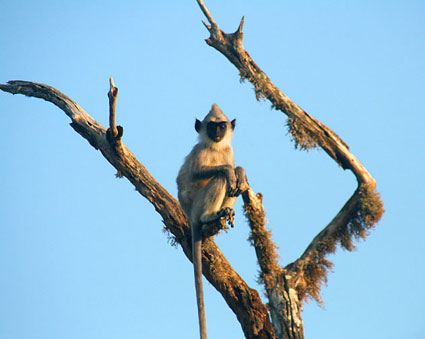 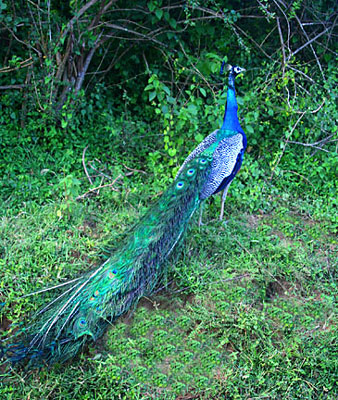 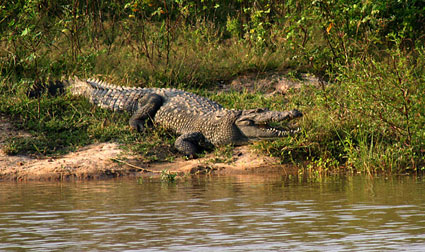