Flatlining vs. Living on the Edge

One would have to live in a dreary country like Sweden, Norway or Iceland that is sun-deprived for most of the year to even contemplate writing an entire book on the subject of boredom. That book has now been written, all 176 pages of it, called A Philosophy of Boredom, by Lars Svendsen, translated from the original Norwegian.


The last time I remember being bored was during those long summer vacations as a child on an isolated Wisconsin farm. I’d lie on my back in the pasture imagining cloud formations of sheep, cows and puppy dogs, or I’d naively follow a killdeer limping on one long leg, faking injury while luring me away from her nest amid the long rows of tasseling corn. Each morning I’d count the hundreds of new blooms in the prolific cutting garden that ringed our manure-fertilized vegetable plot. But there it ended. My adult life has been one of continuously living on the edge.


I am relieved when I can sit back and enjoy a hard-earned period of relative inactivity.
Imagine my consternation when one morning in July, relaxing in our easy chairs after taking our morning power walk around Sail Bay, my husband Gunter turns toward me, “I’m bored.” It is less than a month after returning home from Langkawi, Malaysia, where Pacific Bliss awaits us in Telaga Harbour Marina. During that month, we’ve celebrated Independence Day, then flown to Texas for a week to attend my niece’s wedding. I’m thinking that it is the first real breather we’ve had! TO DO lists for our family reunion in August are already swimming through my head.

“How can you possibly be bored?”
“Life in San Diego is just too easy. The walk around the bay is so…well, civilized. And when I run my errands, I can get Starbucks everywhere. When I go into the supermarket, I am overwhelmed by forty different kinds of jam, a dozen types of peanut butter, an entire aisle of cold cuts and cheese, and a produce section that not only has a refrigerated case, it automatically sprays itself every so often. It feels…well, like Flatlining.”

“As opposed to living on the edge, like we do most of the year?”
Gunter walks into the kitchen and yanks the fridge door open. “See! I could hold this door wide open and let out all the cold air…and it wouldn’t matter. I wouldn’t even have to check the amp meter afterwards. It wouldn’t be a crisis, like that time our crew ran the battery down.” He shuts the fridge and slumps back into his chair.

I worry about the implications of all these words intruding into my hitherto peaceful morning. Flatlining. I always defined that macabre term as what happens when the EKG monitor hooked up to a dying person goes flat. Now Gunter has just flung this new word into our cruising vocabulary, as in Flatlining; what one does when not constrained to living on a boat sailing the seven seas. So what happens when we’ve completed our circumnavigation a couple of years from now and are really retired? That’s another term flung around our household recently. As in life after cruising. Then he’ll really be bored.
Gunter inherited a little of that sanguine, the-glass-is-half-empty pessimistic personality. Could my adventurous husband be falling into the trap of German philosophers? Kant. Goethe. Heidegger. Schopenhauer. Ennui. Existentialism. Metaphysics. Nihilism.


Heavy names. Heavy concepts.
I recall the 19th century German philosopher Arthur Schopenhauer claimed that the two enemies of life are pain and boredom. That’s better. Go Schopenhauer! Because I do not believe in boredom. Is life even long enough to leave room for boredom? As long as I have my mental capacities and can continue to think, to reason?and yes?to read and to write, I cannot imagine ever being bored. For me, boredom is reverting to childhood, a place to which I can no longer go.

I examine the phrase living on the edge: Well, living as a noun can be a description for those who are alive, as in “among the living.” Living can also be a means of earning money, as in “earning a living,” or just maintaining a way of life, as in “improving your standard of living.” It can also pertain to the quality of life or the way in which it is lived. The cruising life. The country life. The landlubber life. The issue is whether one wants to be just alive or really alive?and either objective can be accomplished on land or at sea?either can be done whether or not one insists on living on the edge.

Any rambling ruminations about philosophy were whisked away when our grandchildren arrived. We had a 100% turnout for our reunion; four children, five grandchildren, and two great-grandchildren. Gunter’s boredom evaporated with the arrival of the first grandson, six-year-old Manuel from Munich. Soon the reunion was in full swing. Immersed into teaching the four boys?one six, two sevens, and a ten?how to sail around the bay in a nineteen-foot rented daysailer, he was in his element. 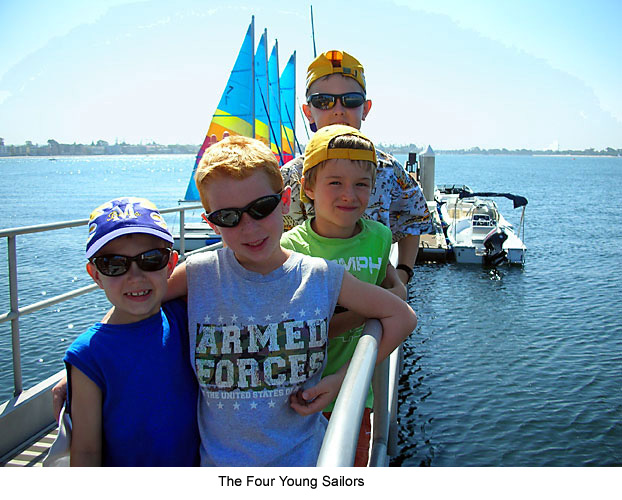 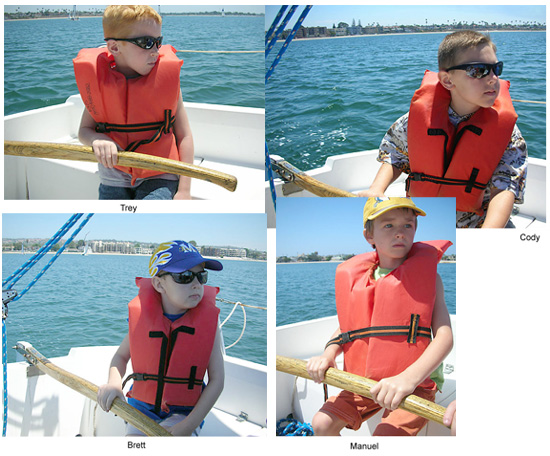 From the end of our reunion week, and throughout August, we’ve entertained a steady procession of family and friends, culminating in Gunter’s birthday celebration. Twenty-six guests and I managed to successfully surprise the curious Captain. Regaining his equilibrium after the well-wishers crowded into our condo, the Captain commanded all the women to gather around him for this birthday photo. Flatlining? He hasn’t mentioned it since. 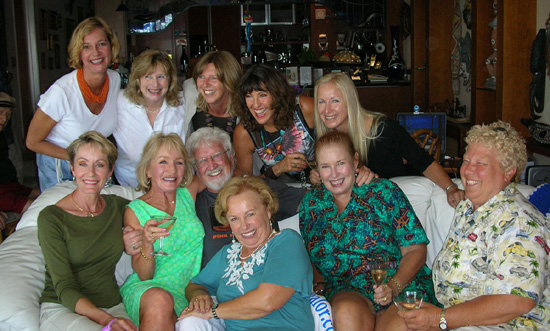 As for living on the edge, we’ll have enough of that to last a lifetime, as we tackle the long voyage from Thailand to Turkey this next season. We’ll be joining a convoy of like-minded yachties as we make the passage from Oman, through infamous “Pirate Alley”, to the port of Aden, followed by an assault against the headwinds of the Red Sea. So tighten your grip on that mouse as you follow our progress. I’ll report in this Journal whenever I can, but I can already guarantee you one thing: this upcoming voyage will not be flatlining.