Riung Rolls Out the Red Carpet
by Lois Joy

The waypoints we were given (by Dick) would have put Pacific Bliss right onto a reef, so I navigate us in directly from the sea—at right angles to the shore. As we come in closer, a local launch boat guides us into the harbor, skirting the reefs in the channel. The reefs have even been buoyed in anticipation for the fleet’s arrival. We leave Pacific Bliss anchored in a gentle swell and attach our dinghy, Petit Bliss, to a newly constructed floating dinghy dock. At this Rally stop, the villagers have doubled the length of their fishing dock to make room for the yachties. Their long unpainted dock extends all the way through the harbor in Riung. This is Riung’s very first time hosting such a Rally, but the villagers are very well prepared. Gunter, Alison, and I are relieved that we don’t have to fight the surf to get ashore, as we did during our last stop, the Dive Sea World anchorage in Flores. 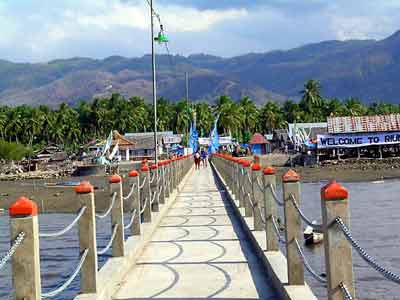 Three little girls stand at the edge of the dock as we pass by, covering their faces with their hands, giggling and gaping. Their mothers have warned them not to gawk, but they do anyway. They have never seen such fair-skinned people. It becomes a problem for the parents in the “baby boats,” Simpatica and Rainbow Voyager: the locals pat the blonde hair and light skin of their children, and ask to hold them. By the end of the day, the babies are cranky from all that fondling by strangers. 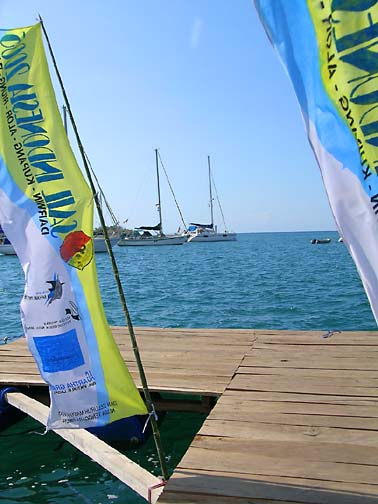 You won’t find Riung in your Lonely Planet, Indonesia; it’s just a poor, backwater fishing village, with thatched-roof houses on stilts leading down to the water’s edge. 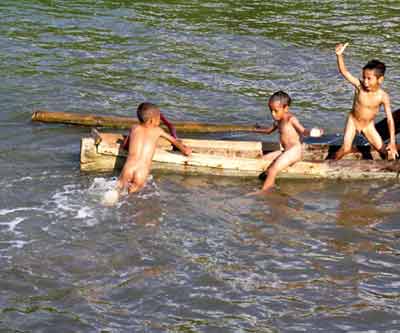 But it turns out to be a charming place, one that I will long remember for its spontaneous hospitality. A line of WELCOME banners greet us as we walk to the village from the dock. A GREETINGS tent has been set up, with vendors selling cold water and juice drinks. As we trudge the dirt road into town, villagers wave from the stilted doorsteps of their dingy, unpainted wooden homes. There is no glass in the windows, just print curtains twirling listlessly in the breeze off the sea. Diaperless toddlers play with anorexic dogs in the shade beneath the homes, before the tide comes in. 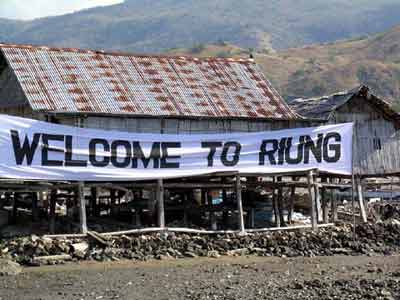 The homes improve as we walk further inland. Some are made of bamboo. And there are satellite dishes here and there. There are a few store-front homes, some with canned food and dry staples, but no fruits, vegetables, or bread. In front of one home, we pass a stand with shelves of large plastic water bottles refilled with gasoline. This is where the scooters fill up, the primary mode of transportation here—besides walking. 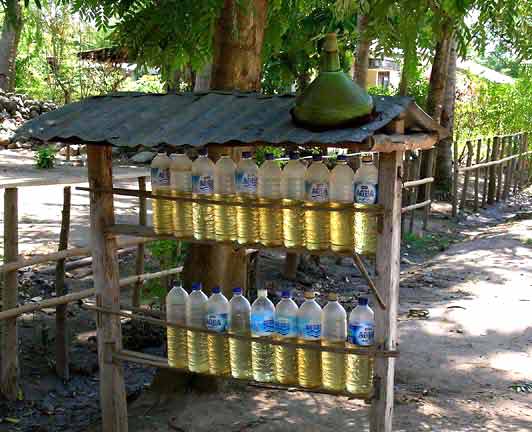 “A typical Indonesian petrol station,” I comment as I focus and press the shutter. 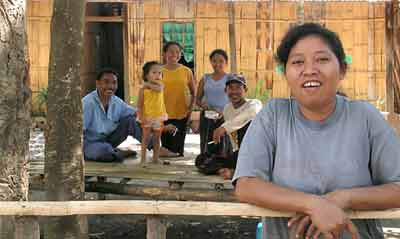 We ask the family sitting on their doorstep, in English, where to go for bread. 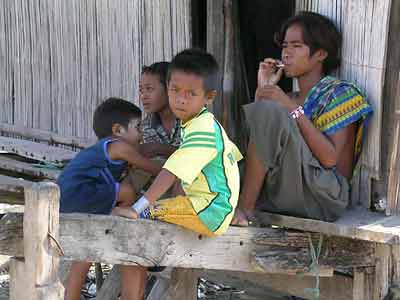 They point down the road. We perspire for a few more blocks as the sun rises toward mid-day. Then we ask again. It is back where we came from. But that wasn’t right either. We had forgotten our Indonesian phrase book back on Pacific Bliss. Mistake. Finally we strike on the right word: Roti. Then we are directed to a bakery. 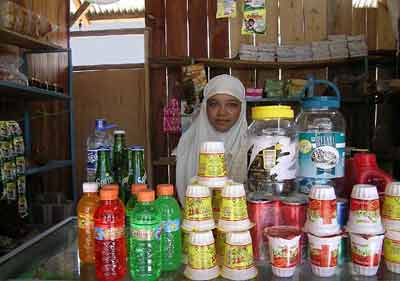 There are few choices: the typical Indonesian roti is bun-shaped and sweet, but the bakery does have two loaves of sliced, white bread. We take them and trudge along, waving and smiling, and wishing we spoke their language.


In the town, there is an old Catholic mission run by a European priest as a converted homestay hotel. It is an interesting place, with an old-fashioned courtyard of crumbling cobblestones and arching shade trees. The proprietor doesn’t have food ready for lunch, but he takes orders for a “yachtie dinner” in the evening. He speaks English, so we have a wonderful conversation, learning about the town. We are surprised to hear that the town is predominantly Catholic and that the stilted homes by the sea belong to the Muslims. (Actually, the entire island of Flores is 95% Catholic, with the Muslim population hugging the waterfront.) Across the street from the mission, I photograph a girl under falling blossoms. I call her my “Petal Girl.” 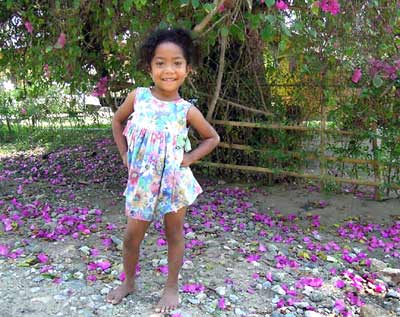 Riung’s main street turns out to be about four blocks long, the only section of paved street. There are no taxis, no bemos. There is a tiny outdoor market. The town has two restaurants, each with two to three tables. The menus are all the same: fried rice or fried noodles with your choice of fish or chicken. The chicken is similar to the “chainsaw chicken” we tired of in Fiji; the cook simply whacks the chicken into unrecognizable small pieces with a cleaver and fries them—bone and all. Since they are emaciated chickens to begin with, it is difficult to find any meat at all. The food by itself is bland, but one can spice it up with the hot sauce that is served on the side; that is, if you want to perspire even more!

Our second day in Riung, we took a bus to a traditional village. We saw many traditional homes made only of bamboo including the walls, roofs, and structural supports. Most homes had graveyards of their ancestors in the front yard. These graves were not just a cross or stone; they were concrete slabs, covering the entire length of the deceased, so they took up lots of space. In fact, some homes had very little front yard left! 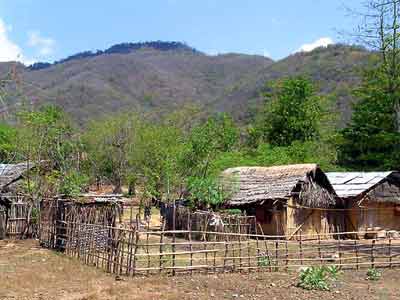 The villagers, dressed in ikat sarongs, greeted us warmly with red, betel-stained smiles. They put on a music-and-dancing show and then asked us to join in and dance with them in their “friendship dance.” Then they opened their arts-and-craft stalls for sales, where I purchased more ikats. We had been given two ikats each at ceremonial dinners in Kupang and Alor, and we had purchased a special blue-colored ikat in Kelimutu, but here in Riung, there was yet another distinction: they had mastered the technique of weaving bright gold thread through the ikat patterns. 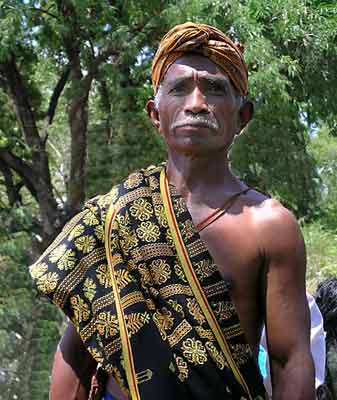 The word ikat, means “to tie or bind” and is the name for the intricately patterned cloth of threads which are painstakingly spun from cotton, then tie-dyed before being woven together in patterns passed down from generation to generation. Traditionally the threads—such as indigo, burnt red, and brown—are dyed with juices from local plants and minerals. However, some of the villages are now using brightly colored, factory-made threads. 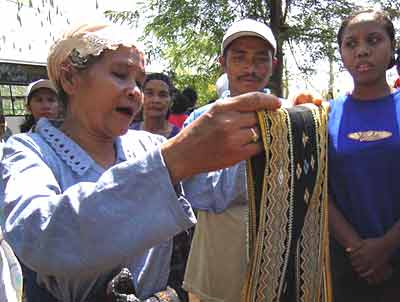 Each region has its own style and patterns. The ikats are woven in a variety of sizes — from 6-inch shawls (the size we have been receiving as gifts) to sarongs (which are worn by both the men and women) to blankets (which are used as burial cloths for the dead and bought by tourists for tablecloths). The ikats are made by the women of the village who produce the dyes, spin and then dye the threads, and then strengthen the threads (by immersing the threads into baths of grated cassava or rice to stiffen them). They then dip sections of the thread in dye (while binding and tying together other sections that they don’t want to receive the dye). A separate tying and dyeing process is carried out for each color that will appear in the finished cloth. After this process, the threads are woven into the intricate patterns on a simple handloom. An experienced weaver can take 7-8 days—working full-time—to make a small ikat, whereas the larger ones can take months. 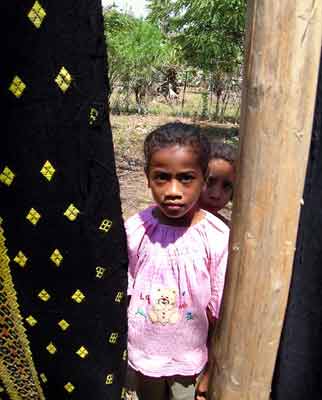 The last evening we are in Riung, there is a formal closing ceremony replete with local bupati: the city council members and village chiefs—all in full ikat dress. We listen to the typical speeches. Then we watch more dancing and listen to the final musical performance—the flutes, drums, xylophones, and trumpets—all made from bamboo. 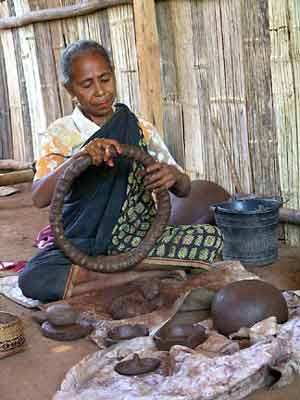 Afterwards, we are invited to a party on board Simpatica. It is the birthday of Liz, one of their crew. Simpatica is heading straight to Bali where Wences needs to catch a flight. Belle and Wences are a great host and hostess and lots of familiar faces are there. During the party, we are surprised to learn that they are planning to pull anchor at midnight.

Belle explains the situation to me: “They like to leave like that, I don’t much care, I go down to bed anyway—still nursing the baby. The guys do the night watches. We have one crew down below sleeping, not partying. Gives us a good start, I guess.”

It turns out to be not such a good start after all. The next morning, we wake up to find Simpatica, anchored in the channel. It appears that they have hit a reef.

“Well no, they didn’t really hit it,” said Eric of Rainbow Voyager talking to Gunter. He had just dinghied back to where Simpatica had anchored for the remainder of the night. “They’re off now. They just decided to wait until morning. They just dented the reef a little.” Hit, dented, brushed, kissed…it’s all the same…just depends on the euphemism you choose. The good news: Eric reported that they’d checked underneath the hull this morning and that all is OK.

By mid-morning, the three of us jump in the water, rinse off and prepare to leave Riung behind. I leave these gracious people, who rarely see a sailboat, with good vibes. I love their friendliness and good intent, and the way they rolled out the red carpet for us. In the cruising life, sometimes it’s the little things that are most remembered. 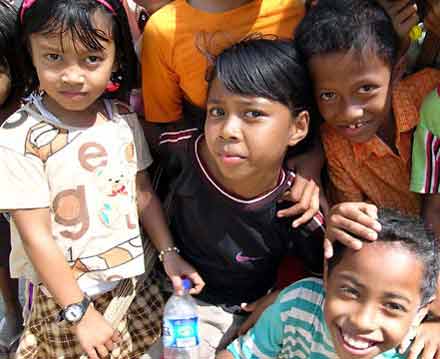 For the first time since leaving Darwin, Australia, I could wear a long skirt and arrive to my destination like a lady. I could dress up for dinner and alight from our dinghy like a queen, with a village boy ready to help me onto the new dock they had built for us. No salt water on my feet. No washing off the gritty sand. No changing shoes or clothes on shore. How we cruisers love those little things! And how we pass on good news: do visit the little fishing village of Riung. You won’t be disappointed!