A Day of Bliss in Langkawi
By Lois Joy

David and Liz came on board last Sunday at 0730 as promised, even though it was raining cats and dogs and monkeys, too. They are the crew on Simpatica, a 47-foot Catana parked next to us on the 'megayacht quay' here in Telaga Harbour , Langkawi (telagaharbour.com) and this was their day off. The plan had been to install the used window air conditioner we'd purchased on Saturday at Nautical Bits in Kuah Town . It was still in the trunk of our rental car.

But since it was raining, we hunkered down for awhile, sipping coffee and listening to our Sunday morning Christian CDs, beginning with Christy Lane , I Believe in Angels. Then Liz and David brought over their favorite CD, a compilation of songs which we enjoyed as well. It was like having our own little service on board. I leisurely segued into breakfast, whipping up a batch of pancakes topped with cooked apples and maple syrup. Then it quit raining, as if on cue, and the crew lifted the heavy air conditioner onto our foredeck, on top of the port fuel tank. We carefully covered the unit with our working' oilcloth, wrapping it with duct tape, like the precious gift that it is. It is ducted into the salon forward window hatch-not pretty, but functional.

Then we left Pacific Bliss to cool down and drove to Oriental Village to take the Cable Car to the top of Langkawi's second highest mountain, Gunung Machinchang (708 m). The mist rising above the red peaked roofs of the little tourist village reminded me of surreal Chinese paintings. 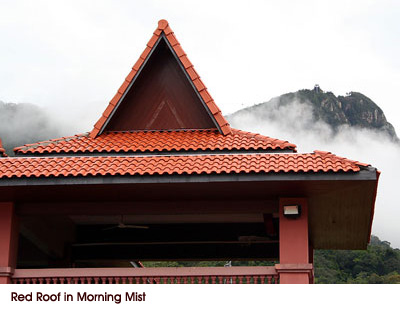 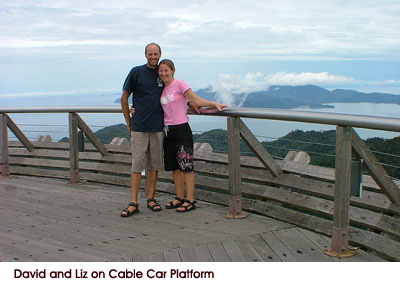 As the tram quickly rose up the steep incline above thick virgin jungle, misty tendrils wrapped themselves around the mountain peak. It was a great day to be alive! The forest was lush, the air was cool, the scenery, magnificent. As we walked around the two platforms-one halfway, the other all the way to the top-we gazed at stunning views: the well-protected Telaga Harbor and Marina directly below, the 99 islands of Langkawi softly beckoning us to explore and cruise again, sprawling resorts and sparkling white-sand beaches. And beyond all that-stretching out to the far horizon as far as we could see-was the tantalizing Andaman Sea . 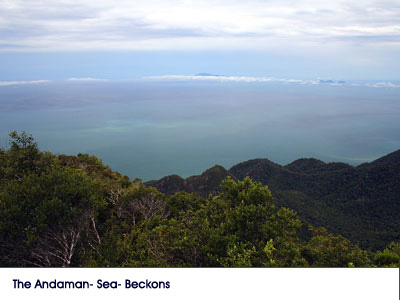 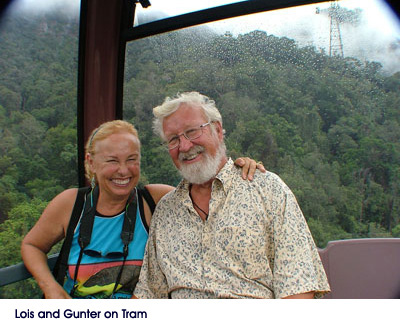 "We'll cross that one day," I thought, "on our voyage across the Indian Ocean and on to the Red Sea ." I was grateful that trip would not be next year already. Our new plan gives us plenty of time in 2006 to thoroughly explore this charming archipelago of Langkawi and then to explore the islands of Thailand as well. We'll cross that sea out there in 2007. No pressure. No worries. For now.

We had a dish of ice cream at the top, perched on stools looking at the view. Then we proceeded down a series of steep, concrete steps on a jungle walk to a suspension bridge. 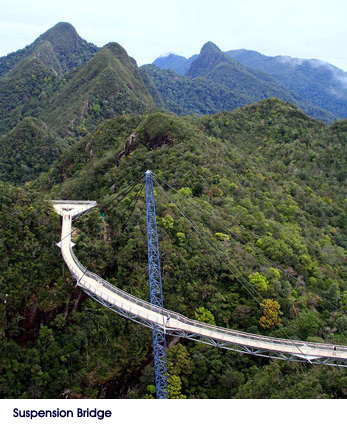 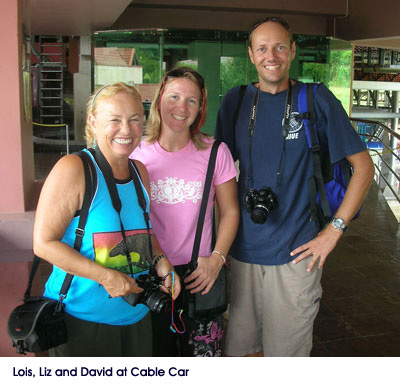 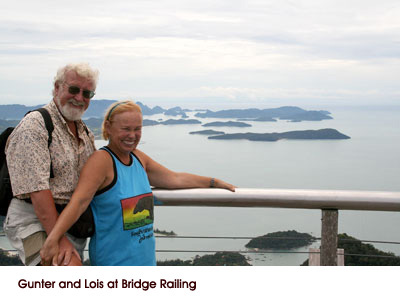 More views. We were closer to the forest. Reportedly there are tigers there, but they come out only at dark. 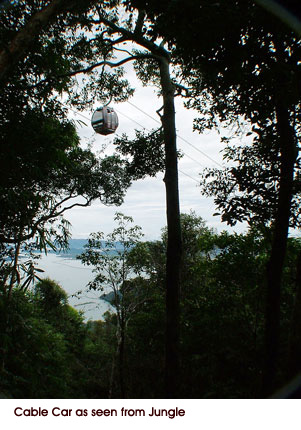 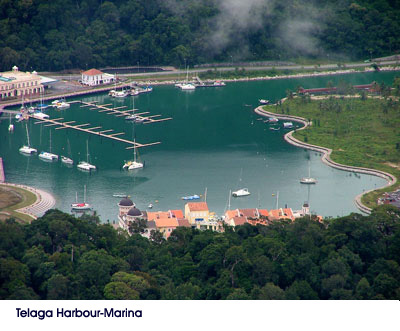 Down at the bottom, we did the typical tourist walk through the Oriental Village , 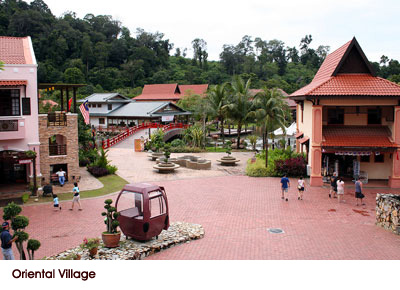 purchasing souvenirs and postcards. The village surrounds a man-made pond with a fountain in the center and a bright red bridge spanning one end. The scene was peaceful, and for a Sunday, not very crowded. 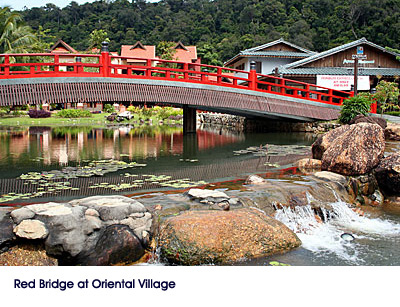 As we left the village and turned off toward Kuah Town , Langkawi's main village, we spotted a group of monkeys along the road. Gunter had brought some bread from the boat just for that purpose; he conducted the feeding-trying 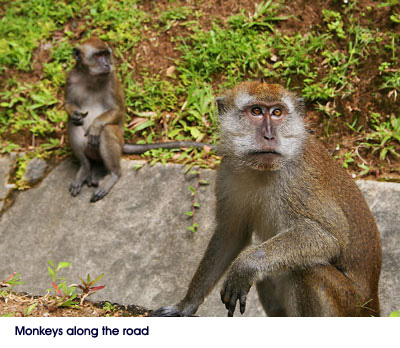 to distribute evenly to the small ones-while the rest of us took photos. They were not very shy, and seemed accustomed to tourists.

At Kuah, we stopped to look at the fishing village along the river that was once the town's mainstay. By then, the sun was out and brutally hot, dampening the primary colors.

Back at Nautical Bits , we dropped off the radar system that had been zapped by lightening back at the fuel dock of Raffles Marina in Singapore . Paul, the Aussie owner, will pass it on to a local expert here who repairs radar for the fishing fleet. (He works nights and sleeps days.) 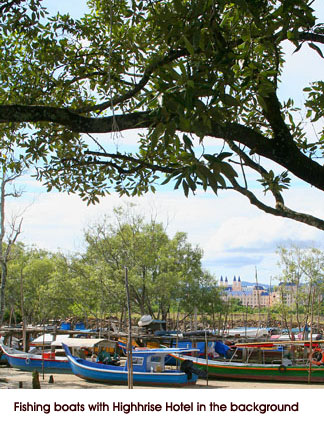 We ended up at the Art Café in an air-conditioned shopping center, sipping blended ice coffees, reportedly the best in town. From there, we drove back to Telaga, leaving more sightseeing for another day. Back on Bliss , we discovered that the air conditioner had taken some humidity out of the air, but it was not cooling. We realized that we had inadvertently covered the outside vents on the side of the unit. We fixed our ducting job and left for the Brazilian Grill, right on the quay where we are docked. The sun was setting as we ordered a round of cool drinks. We feasted on skewers of fish, garlic beef, lamb and pork-all you can eat. Dessert was grilled pineapple dusted with cinnamon. Great food. Wonderful conversation with good friends. What more can a person want?

Well, there was one more thing one would want in this climate. Air conditioning. When we returned to Pacific Bliss, she was actually cool. We invited David and Liz for kalua nightcaps, then sat in the salon, basking in glorious cool and dry. 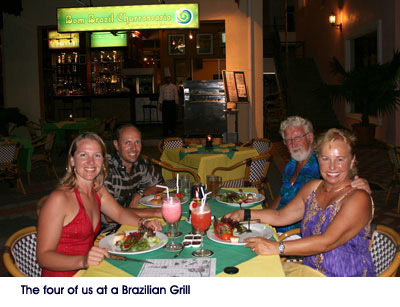 It was the perfect ending to a day of bliss.