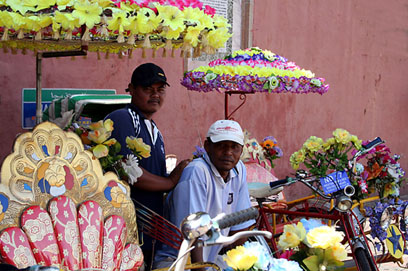 wedged up against each other like sardines in a tin…Chinese shops where strange medicines are sold…Bombay merchants, fat and exuberant, standing at their shop doors selling silk and tinseled jewellery…Tamils, pensive and forlorn, walking with a sinister grace…bearded Arabs in white skull caps, bearing themselves with scornful dignity…a multi-colored and excessive world.” W. Somerset Maugham, Far Eastern Tales.

Such were the sights of yesteryear’s Malaysia, broadcast to the western world by writers such as Conrad, Kipling and Maugham. For a feel of those times gone by, historic Melaka is the place to go.

Last Sunday, Gunter and I took a one-day tour to Melaka with our friends, Toni and Ingrid. With Pacific Bliss safe at B-Dock in Admiral Marina, a few miles south of Port Dickson, we hired a car and driver all day for 160 ringits (about $43 US) and backtracked south along the coast. It was a two-hour ride each way, past massive industrial projects, land reclamation, and condo developments--many of them abandoned since the thwarted economic boom of the 1990s.

Melaka is a small city-state with a most intriguing multicultural heritage. The Melaka sultanates were the beginning of modern Malaysia. Some say that Melaka is more than the birthplace of Malaysia; it is here that you will discover the very soul of the nation. Since we plan to be in Malaysia for quite some time, intending to berth Pacific Bliss in Langkawi during the holidays, I wanted to begin my immersion into Malaysia with an understanding of this fabled port city. 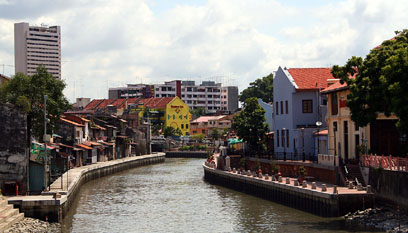 The Naval and Maritime Museums provided the most in-depth understanding of the rise and decline of Melaka as a strategic port. Housed in a huge re-creation of the Flora de la Mar, a Portuguese ship that sank off the coast of Melaka while trying to transport Malaysian treasures back to Europe, it is filled with discolored photographs and descriptive murals of Malaysia’s maritme past.

Back in the 14th century, Melaka was just another lazy fishing village. Then, it attracted the attention of Parameswara, a Hindu priest from Sumatra. He had fled to Singapore where his piracy and other exploits had brought on a Siamese attack in 1398. He fled to Melaka and set up his new headquarters. Under Parameswara, Melaka flourished. It became a 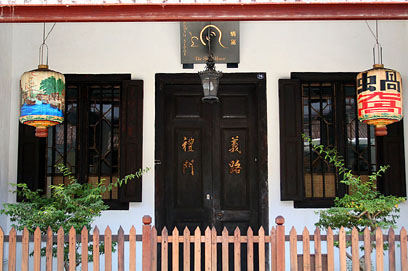 favored port for waiting out monsoons and resupplying trading ships plying the Selat Melaka, the strait between what is now Indonesia and Malaysia that we call the Malacca Strait. Melaka, strategically located between India and China with easy access to the Spice Islands of Indonesia, attracted merchants from all over the east.

In 1405, the famed Chinese Admiral Cheng Ho arrived in Melaka bearing gifts from the Ming emperor as well as a promise of protection from Siamese enemies approaching from the area that is now Thailand. Based on these early contacts with China, settlers followed and became to be known as the Baba or Nonya (Straits Chinese). They are the longest settled Chinese people in Malaysia and mixed Malaysian customs with their own.

There were the inevitable squabbles and intrigues, but by the time of Parameswara’s death in 1414, Melaka was already a powerful trading state.

Melaka came into contact with Islam through the traders from India. In 1424, the third ruler of Melaka converted to Islam. Then his son, Mudzaffer Shah, took the title of Sultan and made Islam the state religion. From Melaka, he disseminated Islam through all of the Indonesian archipelago. He attracted Muslim Indian merchants from competing Sumatran ports. The Melaka sultans ruled over the greatest empire in Malaysia’s history and successfully repelled Siamese attacks. The Malay language became the lingua franca of trade in the region, and Melaka produced the first major piece of Malay literature, the Malay Annals, the history of the Sultanate. In the museum, we strode past murals depicting the early port activities and artwork depicting the glamour of the Sultanate. 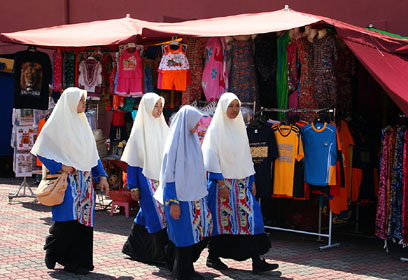 But all this ended when the Europeans came on the scene. Melaka entered a period of steady and inevitable decline. It is a typical story: the Portuguese arrived in 1509 seeking the wealth of spice and trade with China, but after an initial friendly reception, the Melakans attacked and took Portuguese prisoners. This prompted an assault, and in 1511 Alfonso de Albuquerque took the city, causing the Sultan to flee to Johor, where he re-established his kingdom. Missionaries came and Catholicism was implanted. But while cannons could conquer, the Portuguese could not force Muslim merchants from Arabia and India to continue trading there. Other ports such as Java overshadowed Melaka. The port city suffered attacks from neigboring Johor and Sembilan, as well as from the Islamic power of Aceh in Sumatra. Dutch influence grew in Indonesia and Batavia (modern Jakarta) developed as the key European port of the region.

In 1641, Melaka passed into Dutch hands after an eight-month siege. They ruled for 150 years, and Melaka was again a center for peninsular trade; however, the Dutch put more emphasis into their possessions in Indonesia.

By 1795, back in Europe, the French Revolution was raging and the French had occupied Holland. Britain was an ally of the Dutch and offered to take over administration of the Dutch colonies to prevent their falling into French hands. The British administration was principally focused on enhancing trade, so they abolished the monopolistic. trading policies of the Dutch. The Brits also saw a forthcoming rivalry with the Dutch trading, so they forcibly removed the Dutch population up the coast to Penang. They wanted to weaken the port, so if Melaka were returned, it could not rival their own Malayan ports! Fortunately, the farsighted Sir Thomas Raffles stepped in to propose a win-win compromise: Melaka was permanently ceded to the British in 1824 in exchange for another Sumatran port. Now the British had control of Singapore, Melaka, and Penang, called the Straits settlements, the basis for further expansion into the Malay peninsula. Under the British, it was Singapore that became the preferred seaport. Today, that port still handles 50% of the world’s shipping and 90% of Japan’s oil, while the importance of Melaka has declined. 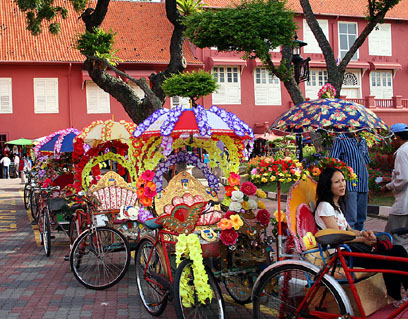 We took the Lonely Planet walking tour of old-town Melaka, telling our driver to pick us up at 5 P.M. We started our tour at the charming town square, containing a cathedral and the old town hall with its massive clock tower, built in the traditional Dutch architectural style. In the center of the square was a wonderful garden my mother would have loved, including a working windmill. Bicycle-driven rickshaws decorated in colorful plastic flowers and delicate parasols were lined up waiting for passengers along the garden and the nearby tourists stall—overflowing with goods from all over southeast Asia.

My favorite site on the tour was the Baba-Nyonya Heritage Museum: 48&50 Jalan Tun Tan Cheng Lock, across the river from the town square. Set in two side-by-side traditional Perankan townhouses in Chinatown, the house has been coverted into a private museum by the descendants of a weathly Baba-Nonya family. Baba-Nonya is a common term here that refers to decendants of the Chinese immigrants to the first Straits settlements: Melaka, Singapore, and Penang. These immigrants intermarried with the Malays and adopted many of their customs. This particular museum depicts the lifestyle and furnishings of the marriage of a European trader with a wealthy Chinese woman of class—a fascinating east-meets-west story. 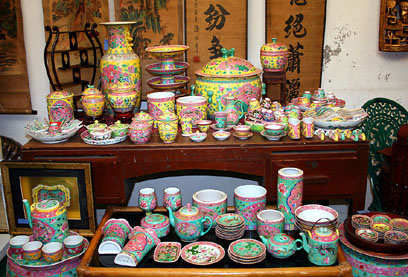 There are sets of Victorian pattern china for entertaining western guests as well as sets of ‘Nyonya-ware’, multi-colored ceramic designs from Jiangxi and Guangdong provinces in China, made specifically for the Straits Chinese. I learned that the traditional blue-and-white Chinese china was originally used only for special occasions such as funerals. The pastel china was for every-day use.

The furniture in the home is magnificent and massive: Chinese hardwoods fashioned in a mixture of Chinese, Victorian, and Dutch design with mother-of-pearl inlay; marble tops imported from Italy. The staircase to the upper bedroom levels was carved by craftsmen brought in from China. The ceramic tile is of the Nyonya style: a blend of pink, yellow, dark-blue, and green. An open ceiling in the center of the combined townhouses allows light and fresh air, with a tiled drain—surrounded by potted plants—to catch the rainfall. Our Chinese guide explained the various displays depicting funeral and wedding customs and attire, how guests were entertained, and how parlor games were played.

We walked past numerous other townhouses that had been converted into shops; they are very narrow and deep, displaying goods for sale at the street entrance, with courtyards and fountains in the very back.

The highlight of Chinatown was the Cheng Hoon Teng Temple, dedicated to the goddess of mercy. It is the oldest Chinese temple in Malaysia, dating back to 1646. All of the building materials—and the artisans to build it—were imported from China. The temple’s interior was an explosion of black, red and gold. 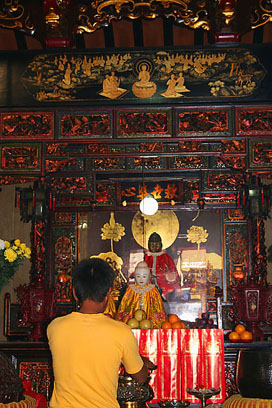 It was fascinating to watch the Chinese lighting incense sticks and candles and presenting their offerings, but by the time we had walked to the Temple, we were dripping with sweat and faint from the mid-day heat. We elected to skip the last fourth of the walking tour and took rickshaws (10 ringits for each) back to the town square to search for an air-conditioned restaurant. There were none there, so we took rickshaws back across the river to the popular
Chinese restaurant called Restoran Perakan, large and airy, but not air-conditioned as we were told. We discovered that by ‘air-conditioning’ the Malaysians mean ‘cool’ and we selected a round table directly beneath one of the huge celing fans! Their specialty is tom yan soup, spicy and hot. Thanks but no thanks! We all liked our meals there though and prices were reasonable. No green tea ice cream for dessert though, that appears to be served only in Japanese sushi bars! The Chinese tend to serve fresh fruit. 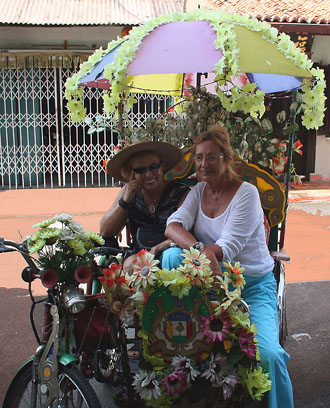 We finalized our tour with some shopping at the stalls. I finally found one item I’d been searching for: an elastic-waisted ‘crinkle-skirt’ of the right length, one that packs without wrinkling and can be tucked into a bag to slip over shorts for visiting temples. I fnally threw out my old stand-by purchased in Bali 11 years ago! Gunter also selected a cute, skimpy sundress for me.

Did we discover Malaysia’s soul? For sure, Melaka was a good beginning. I now understand more about its culture and heritage. As is the case with most countries we sail through, we need to live here awhile, observe, and interact. Discovery is a process, a path; it is not a quick fix. 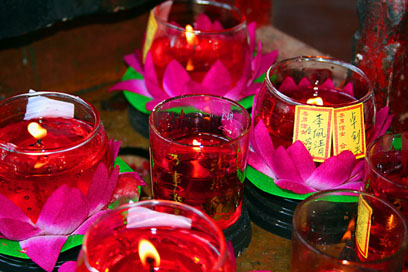 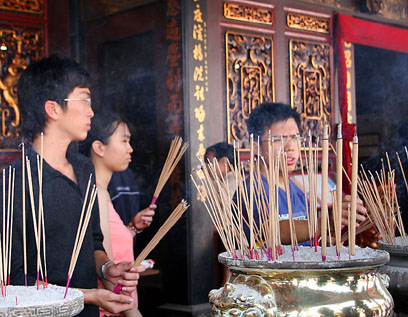