The Moods of Kelimutu
By Lois Joy

As I photographed the ever-changing scene before me, the mysterious mist appeared and disappeared over the crater lakes. At first, I waited for the mist to clear to take my photos. Then, as it wafted in again, I realized I liked the eerie effect. It fit with the legends of the many moods of Kelimutu. 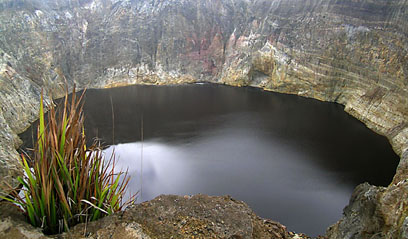 From one vantage point, standing at the concrete tower positioned at the summit of the volcano at 1600 meters, one can see all three crater lakes at once. When we saw them yesterday, the largest was a deep sea-green teal. The lake nearby was a rusty dark brown, and the third, a pitch black. But they are not always so. These legendary lakes have a reputation for changing colors, depending on their moods. 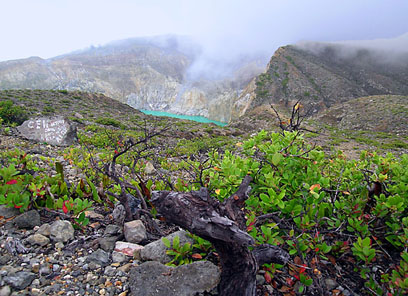 According to the Lonely Planet Indonesia, “Of all the incredible sights in Nusa Tengara, (comprising the islands of Sumba, West Timor, Alor, Solar, Flores, Lombok, and Sumbawa), the colored lakes of Kelimutu are undoubtedly the most spectacular.” We had sailed 155 nautical miles from Kalabahi, Alor to Sea World, then set the alarm for 5AM the day after our arrival. We hired a car and driver who raced for four hours along winding mountain roads, honking at every turn. But it was worth it. Do not miss this stop if you are traveling in Indonesia.

The Lonely Planet goes on to say, “A few years ago, the colors were blue, maroon and black. Back in the 1960s, it is said that the colors were blue, red-brown, and café au lait.” The colors, the locals say, can also change depending on the weather, and they are less spectacular in the rainy season. (August is ‘in the dry,’’ although one wouldn’t realize that proceeding through the rain forest. We made our way back down the mountains on drenched and slippery roads.) At any rate, the cause of the colors and the reason why they change is a mystery. When the mist blows over the desolate moonscape at the top, the entire area takes on an ethereal atmosphere that makes one think of ghost and goblins and myths. 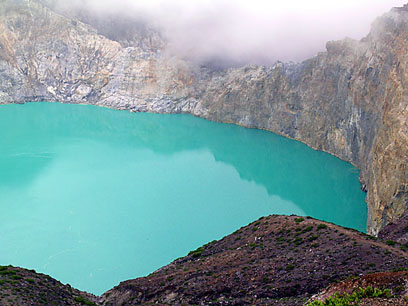 The locals say that the souls of the dead go to these three lakes: young’uns go to the warmth of Tiwu Nuwa Muri Koo Fai (the teal lake); old people go to the cold of Tiwi Ala Mbupu (the brown lake); and the thieves and murderers to Tiwi Ata Polo (the black lake).

Scientists say that different minerals are dissolved in each lake, but then how can one explain its many moods? The Indonesia Handbook by Footprints claims that the lakes changed colors 37 times in the last 50 years! In the 1970s, they say, the lakes were red, white, and blue—giving way to black/maroon, iridescent green and yellow green. 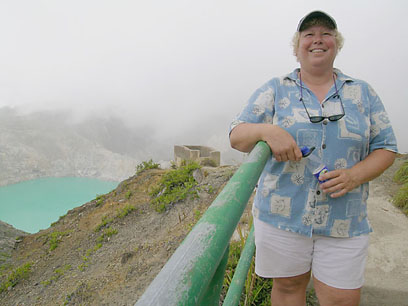 In 1997, they supposedly underwent a transformation to brown/black, café au lait, and milky blue. The lakes, it claims, are resting places for souls called by the Mutu (hence the name Kelimutu, keli standing for mountain.) When those eerie mists come, someone is thought to be passing on. “Lots of spirits here today,” I mused. I had seen the mists come every five to ten minutes for half and hour or more—a challenging ‘opportunity’ for a photographer! 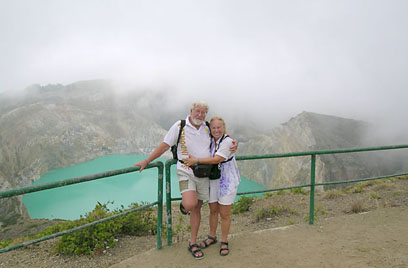 As we descended down the trail to the car park 30 minutes below, the showers began in earnest. I returned my camera equipment into my backpack and slipped out my trusty jacket-in-a-bag that has served me well over my years of traveling. After the heat and humidity we’d been enduring the last few weeks, sailing through Indonesian islands in light winds, the rain-splashed ride back down the mountain was refreshingly cool. I cozied up under a brightly colored length of IKAT, a woven material that I’d just purchased at the one of the omnipresent stalls near the car park. Famished, our group of five yachties stopped at a small fam 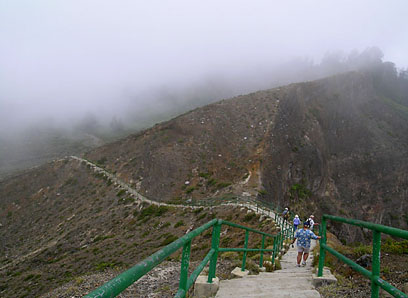 ily restaurant in Moni. The Flores coffee, grown nearby, was so strong one could feel one’s heart palpitating and so thick with grounds on the bottom that one could stand up the spoon. We waited the customary hour, on Indonesian time, for a simple lunch; after which each person’s order was brought to our table at ten-minute intervals. We’ve learned while in Indonesia to eat when served. Eating together separately, it is called.

We made one photo stop near Moni where I photographed a water buffalo up close, a farmer who graciously posed for me in a rice paddy, and schoolchildren walking along the irrigation ditch. Once the schoolchildren saw their images on the back of my digital Nikon, they didn’t want me to quit. But our driver was motioning me to hurry. We had a long, winding drive ahead of us.

From Moni, the narrow, black-top road descends 93 kilometers to Maumere through limestone gorges with precipitous drops. The settlers along the roadside make good use of the road, their only flat surface. They lay out coffee beans to dry on plastic sheeting spread out over the blacktop, taking up one of the two lanes. Their homes perch on the steep incline dropping off to the valleys below, the fronts right up to the road, the backs extending over the valleys on bamboo stilts wedged into rock. Some homes have balconies that extend even further. I wondered how parents prevented their small children from falling miles below. 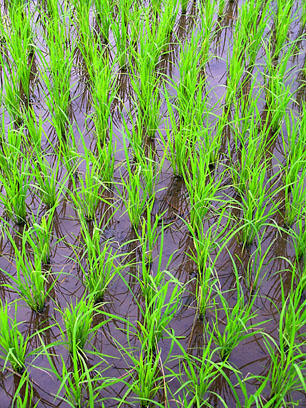 Maumere itself is a large town, similar to Kupang, Alor, our first Indonesian port on this Darwin-to-Kupang Rally. In the outskirts, we drove past unsightly concrete block houses, devoid of window panes or curtains. 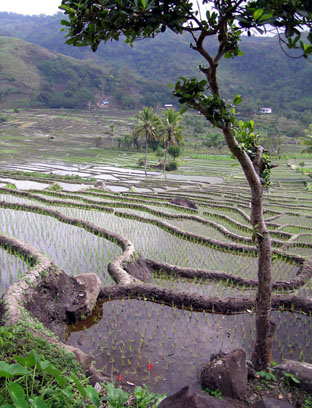 The center of town was cleaner and brighter. The stadium was hosting a regional soccer play-off. Large groups of energetic schoolchildren filed past—some marching—sporting uniforms and warm-up suits in blues, reds, and even day-glo fuchsia-pink.

We returned to the bar at Sea World Resort at sundowner time. It was time for tall Bintangs (the local beer) all around, a prelude to launching our dinghies across the surf to reach our yachts, gently bobbing at anchor. It had been a long-but-rewarding twelve-hour excursion. We would sleep well that night.

Note: The photos accompanying this story are available in 300 dpi for printing. Contact Us for queries via email.

Photographers’ Advice: It is possible to take the sunrise excursion to Kelimutu, starting at 2:00 AM from Maumere or Sea World and braving the winding mountain trip in the dark. Those who have done so, however, report that—while the sunrise in favorable conditions is awesome—one must then wait for a few hours until the sun in high enough to photograph the tri-color crater lakes. 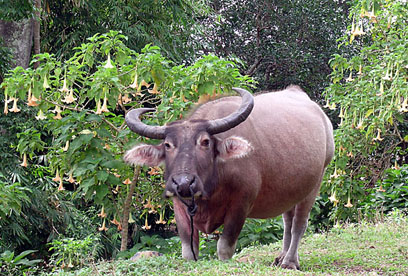 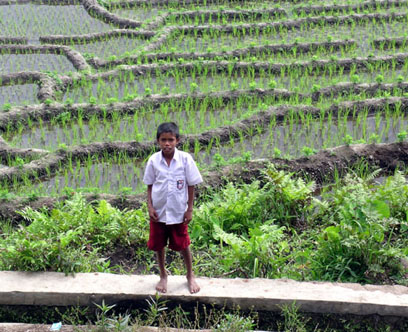